An Interview With Lisa Cohen

“Digital signage is an extension of environmental graphic design,” says Lisa Cohen, manager of environmental media at Bloomberg L.P., New York. “If you look at it any other way, you are doing a disservice to the industry.” 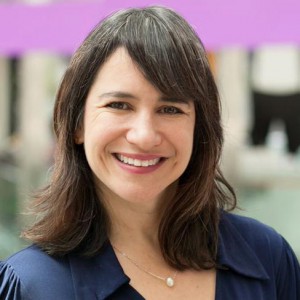 Cohen, who was formerly interactive designer at Bloomberg, was involved with just about all phases of Bloomberg’s award-winning digital signage at its headquarters and more recently its work at London City Airport.

She will be one of the inspiring speakers at The DailyDOOH Investor Conference, the October 22 centerpiece of New York Digital Signage Week. She will also be doing double duty as a speaker at the Employee Communications for Digital Signage summit, which takes place Thursday October 23, 2014 the following day.

“No one talks much about design in digital signage, but that’s key,” says Cohen who spoke to us last Friday. “And what is most important is the keeping of content fresh on a constant basis. Even the changing of colours, and the shape of the signage and how it is being used are some of the other important considerations. Take the colour red: it means different things to different people. It can convey ‘Stop’ or ‘Danger’ or anger, or even happiness and success to some people. So consider your target audience.”

Among its ever changing colours, Bloomberg uses green when the market is up and red when it’s down on some of its signage. And colours change for other reasons as well, if, eg. it’s sunny in Oslo or raining in London.

Thinking in terms of shape, in an area of Bloomberg headquarters where both staff and visitors meet, the ever changing digital content is in four separated strips, designed to fit the room’s architecture as well as to draw awareness and to help brand Bloomberg.

“And people want to know what’s going on right now, so content must be immediate and relevant – and easily consumed because it’s a snapshot of the moment,” says Cohen. “Make it interesting.”

Corporate communications doesn’t have to be boring either, says Cohen. Digital screens in a plant away from the head office can be inspirational and motivational. They can carry not only current news but such messages as ‘How many terminals were installed today’ or ‘how many calls have been taken today’ or ‘how many widgits have we sold this week’. They can also carry fun facts.

“Such screen content can boost morale and help workflow management,” Cohen says. “But regardless of where your screens are, try a lexicon of design, image, symbols, animation to do a well designed canvas. Consider the shape as well as the design to see how it fits in the world around it. Not all designs look good on every screen size.”

Cohen was responsible for relaunching Bloomberg’s own internal communications network Arcade to help create a ‘Bloomberg culture’ among employees worldwide.

“It’s fun for employees to see what employees are doing in other offices around the world,” she says. “It may not be relevant to see the office in Australia having a party, but then you may meet someone in a training session later on and remember seeing them partying. You sort of feel you know them already. It helps connect and build bridges.

“It’s also used locally for messages such as ‘Come down to the sixth floor today to donate blood’. And employees can put photos on for others to see.

“So internal networks can be used for learning, for recognition, for communications and more.”

Bloomberg’s aforementioned four LED band strips serve as a high level branding tool and show data in a unique way, but they also enhance the environment for both visitors and employees, Cohen says. “They not only impress, but serve even to help recruit staff, because people coming say, “This is the type of environment where I’d like to work.” They bring energy and excitement and a sense of urgency.”

You can register for The DailyDOOH Investor Conference here, which takes place Wednesday October 22, 2014.

Bloomberg has developed a holistic environmental media strategy to leverage its strengths as a data company. Lisa will discuss three data-driven digital signage initiatives: an immersive brand experience at London City Airport, which launched earlier this year; a large 4-banded LED that encircles the NYC Headquarters; and a network of metric dashboards, placed throughout Bloomberg offices, which keep employees in-the-know. Through these case studies, attendees will learn how Bloomberg uses dynamic digital signage as a critical element of its marketing and communications strategies.

Registration for the Employee Communications for Digital Signage summit, which takes place Thursday October 23, 2014 will be open shortly.

This entry was posted on Wednesday, September 17th, 2014 at 10:00 @458 and is filed under DailyDOOH Update. You can follow any responses to this entry through the RSS 2.0 feed. You can leave a response, or trackback from your own site.