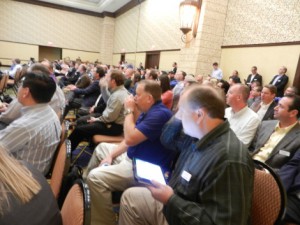 Scott Maccabe, president and CEO, Toshiba Americas Business Solutions Inc., Bill Melo, chief marketing executive, and Joseph Contreras, director, product and solutions marketing, electronic imaging division, got Tuesday off to a start by stressing Toshiba’s ability to be a complete business solutions provider and saying that digital signage was now a key part of its offerings.

However, seeing that digital signage gives a new growth potential for Toshiba while recognizing that it’s somewhat late getting into the game, Toshiba is taking a somewhat different approach in several ways:

“Rather than going to our dealers to sell our digital signage – although that, of course, can be done, too – our marketing strategy will be to go to end users, see what they need, and bring it to our dealers to be able to fill those needs through our own offerings and those of our partners,” said Bill Melo, chief marketing office. “We want to bring customers a full suite of solutions.” And it seems that Toshiba offers financial options in helping those customers get there. 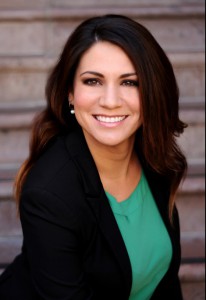 About 115 customers and potential customers were among attendants at the LEAD conference, and it was standing room only at the back of the Toshiba first breakout session on digital signage on Tuesday. It was very much an educational session, headed by Maegan Lujan, Toshiba’s marketing strategies manager. Their having heard the basics Toshiba’s digital signage plans, Lujan gave them an in-depth presentation of Ellumina, the brand name given to Toshiba’s digital signage services. You could tell from the questions asked that there was a high degree of wanting-to-learn by the audience.

Toshiba is focusing particularly on three sectors: sports and entertainment; schools/colleges/universities; retail and grocery. While it had already quietly put digital signage in several arenas such as the home of the Houston Astros, its launch of LA Interactive at the STAPLES Center last Saturday was its formal launch party. This permanent fan experience locale showed off some of Toshiba’s strengths, particularly in the interactive sector. Under the Ellumina brand, its interactive displays fall under the Virtuoso name, while the screens using Experience Manager use software from ComQi.

Another big announcement is also expected in the retail sector, likely to come through a sister company Toshiba TEC POS. If it comes through as expected, it could mean installation of 1,000 screens and an eight-figure deal. 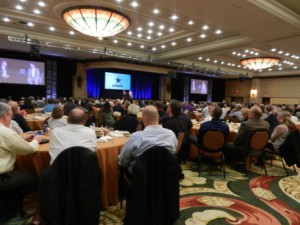 This concentration on digital signage does not mean that the company has abandoned its core business with ultramodern printers, copiers and other managed business services. Not at all. Rather, it sees this as an extension to helping people to communicate, as the theme line of LEAD said, ‘Print. Work. Communicate. Smarter’.

Maccabe, who stressed the line ‘Together Information’, says that Toshiba Corporation (which owns 51% of Toshiba TEC, which in turn owns 100% of Toshiba Americas Business Solutions Inc.) has urged all Toshiba companies to research and develop new technology and to share it with each other, meaning that his company has access to technology over and beyond that of his own firm. But collaboration with partners is key to its turnkey offerings in digital signage.

“We are able to provide customized and fully branded displays of all types, both advertising supported and corporate, through our own offerings and by leveraging the partnerships,” he said.

While the Toshiba executives were able to discuss the use of analytics, live data, analytics augmented reality, wayfinding, fragmentation, call to action, use of social media, scheduling, couponing, use of beacons and more, they admit, “We have to get our dealers up to speed.” 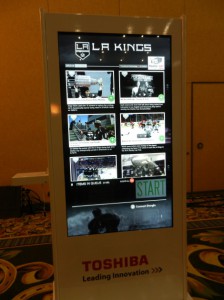 That the dealers were keen to learn was evidenced by attention paid at each of the breakout sessions. Brian Cheek, head of business development at Postano, with a panel of three digital signage users, and Joe Tucker, vice-president of D3 LED, each tackled content in their presentations. The panelists, from the academic, sports and financial worlds, each discussed the reasons that they felt digital signage was a solution to their needs, the messages that they wanted to get across, social media, and how they went about using it.

The attendees were keen to learn and that’s what Toshiba executives were obviously counting on. From last year’s LEAD conference, Toshiba gained $10 million in business as a direct result. This year, with its new digital signage offering, it expects to gain even more.

This entry was posted on Friday, November 14th, 2014 at 04:52 @244 and is filed under DailyDOOH Update. You can follow any responses to this entry through the RSS 2.0 feed. You can leave a response, or trackback from your own site.

One Response to “Digital Signage Focus At Toshiba’s LEAD Conference”