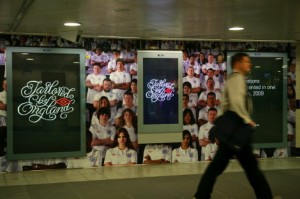 Umbro chose a combination of CBS Outdoor’s high-impact advertising formats for the launch of the new kit.

For those of you who do not know the ‘digiwall’; it comprises a floor to ceiling vinyl wall wrap with images of supporters from varied nationalities wearing the kit.

Running with the strap line ‘198 nations represented in one. London, 2009’, the campaign is designed to honour the past with traditional kit design, but also to look to the future to encompass England’s diverse population and embed the brand within contemporary culture.

CBS Outdoor’s digiwall format aims to deliver huge standout while offering the real-time flexibility of digital Outdoor. Mounted on the wrapped Tube wall are two striking black backlit posters that carry the ‘Tailored by England’ strap line, alongside a 57” HD screen showing clips of the supporters cut with questions challenging the meaning of being English.

Umbro has also bought CBS Outdoor’s Oxford Circus 5-Ways, an exclusive domination of the busy tunnels that lead to the exit escalators. The walls will be wrapped with same creative used on the digiwall, giving Umbro 300m2 of brand impact for the new kit.

Rob Seidu, Account Director, Mindshare, told us “Umbro’s campaign for the new England shirt brings to life England’s relationship with football, it fuels, influences and inspires culture. Umbro, with the help of Mindshare, wanted to communicate its ‘Tailored by England’ message to a young, brand audience. CBS Outdoor’s Underground inventory allows Umbro to reach and impact on its desired audience within the heart of London’s fashion district.”

This entry was posted on Tuesday, April 7th, 2009 at 16:08 @714 and is filed under DailyDOOH Update. You can follow any responses to this entry through the RSS 2.0 feed. You can leave a response, or trackback from your own site.