A new study using neuroscience demonstrates for the first time how digital out of home positively influences responses to other media, exerting a clear impact on the wider digital universe. 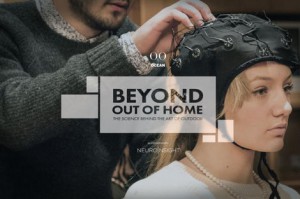 The pioneering research, conducted by Neuro-Insight for Ocean Outdoor, used brain imaging to explore the neurological impact of digital out of home on other screen and mobile devices.

The results of the Beyond Out Of Home study were released today (Friday, March 27) at BAFTA in London before an invited audience of 100 advertising executives, media buyers and industry specialists.

Heather Andrew, CEO of Neuro-Insight (UK) which conducted the study, said: “A previous study had demonstrated that premium outdoor sites positively primed responses to standard outdoor sites. In this new study, we set out to discover whether this priming effect worked beyond outdoor and could apply to other screen based media that is consumed out of home.

“The results were unequivocal in demonstrating strong priming impacts, but we actually found even more than we expected.  First of all, we discovered that, regardless of the creative, mere exposure to the priming medium had an impact.

“People who’d seen digital out of home first responded more strongly to advertising on mobile devices, even when not linked to the campaign they had seen on DOOH, than those who’d been exposed to television.

“We call this the congruence effect because it demonstrates for the first time the importance of environment and the power of “brainstate” on people’s responses to advertising.”

Tim Bleakley, Ocean CEO, told us “The findings have clear implications for maximising the impact of cross-media screen campaigns by harnessing the specific priming impact of digital out of home.

“We already knew that iconic, large format advertising delivers heightened emotional response and strong memory encoding, and that this impact is heightened by full motion screens.  We also knew going into this study, that large, iconic sites had a positive priming effect on other OOH advertising.  This new study takes the learnings further, to show that the priming impact of DOOH extends beyond the OOH world and into the wider all screen media universe.

“We’ve now established that there is a clear congruence between screen experiences out of home, and the combination of large and small screens, accessed on the go, is a particularly powerful one.”

The sample consisted of 192 people, made up of equal numbers of men and women, with an age range from 18 to 65.  People were convened in groups of eight in London and Birmingham.

To ensure the study was robust, the neuroscientists set up a control; whilst some people were exposed to DOOH ads, others were exposed to ads from the same campaigns on television.  Two advertising campaigns for Peugeot and Lynx were deployed and the sample split further so that half the people from both the DOOH and TV groups saw each campaign at the priming media stage.

Prior to brain readings taking place, people were exposed to advertising for one of the two brands, either on a DOOH site or on television.  People only saw the digital site by walking past it on the way to the study location from a pre-arranged meeting point, and saw the TV ad in a programme that was aired “in the background” in a holding room prior to the research session starting.  In neither case was people’s attention explicitly drawn to the medium or the advertising messages.

Respondents were then were exposed to branded messages for the two featured brands in magazines and on iPads. Using this approach, neuroscientists were able to compare:

In each case, they could examine responses to unlinked advertising and responses to ads from the same campaign.

Prior exposure to a creative campaign on television led to higher levels of response when another execution from that campaign was subsequently seen in a magazine.

Prior exposure to a creative campaign on a full motion digital OOH site led to higher levels of response when another execution from that campaign was subsequently seen on a mobile screen.

This effect is statistically significant and reflects what is called the congruence effect – the impact of environment and ‘brainstate’ on responses.  TV is immersive and involves a sedentary state in the home, just like magazine reading.  DOOH involves a heightened response to communication seen out of home whilst on the go, just like mobile devices.  The brain is very receptive to the power of context and congruence plays a role in how we respond to things, as this study shows.

Note that Heather Andrew  will be presenting at 11:30 on May 19, 2015 at The DailyDOOH Media Summit in London.

This entry was posted on Friday, March 27th, 2015 at 09:00 @417 and is filed under DailyDOOH Update. You can follow any responses to this entry through the RSS 2.0 feed. You can leave a response, or trackback from your own site.