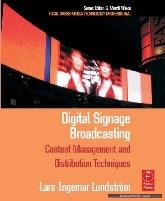 A weird title for a book as Digital Signage is usually seen as anything but “Broadcasting” and god knows what the Dutch who love the term ‘narrowcasting’ would make of it but anyway, this book is one of the first that we have seen claiming to be specifically about Digital Signage.

We have asked for a couple of copies to review and give away and will write more on it once read.

The publishers, Focal Press tell us that…

Digital Signage Broadcasting is a perfect introduction to this new world of opportunities for media professionals in all areas. Whether you are in engineering, IT, advertising, or management, you will gain knowledge on the operations of digital signage systems, content gathering, customer billing, and much more about this new and exciting medium. The book is also useful for educational purposes in media and advertising schools.

This book includes coverage of basic elements, examples of advanced digital signage applications, as well as traffic capacity calculation formulas that can provide guidance when choosing a means of distribution such as physical media, broadband, or satellite. Digital Signage Broadcasting helps you discover the fascinating possibilities of this new convergence medium with hundreds of color illustrations, created using the latest 3D graphics methods, and real-life photographs that show the capabilities and future of digital signage.

Lars-Ingemar has been quite a prolific author in English, Swedish and Norwegian since 1986 having published previously…

More background is available at www.digitalsignagebroadcasting.com

This entry was posted on Wednesday, February 13th, 2008 at 07:42 @362 and is filed under Scuttlebut. You can follow any responses to this entry through the RSS 2.0 feed. You can leave a response, or trackback from your own site.

One Response to “Lars-Ingemar Lundström on “Digital Signage Broadcasting””