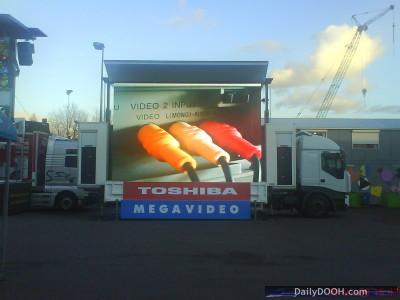 This year if you wanted to showcase big, big screens (and we are talking about bigger than the 100| and 150″ LCDs show cased by folks such as Panasonic) then you needed to be at ISE, Amsterdam.

Screen Expo Europe has a single Daktronics and a couple of vans outside (with actually quite small screens which were difficult to read we thought) whereas ISE had dozens of giant LED screens inside and TRUCKS and LORRIES outside!!

The picture above shows how good an LED can be if you are the right viewing distance away from it – it’s Toshiba (obviously).

The star of the big LED screens at ISE was undoubtedly Mitsubishi who had a huge screen at the front of the hall – it must have been at least 10 feet tall. Most of the LED screens on show were 4.5mm dot pitch – which seemed to be the new ‘sweet spot’ for manufacturers.

One thing to remember with LED is that it is very hard to get HD pictures on them. With a 4mm dot pitch, to get 1080 lines you would need a screen at least 4 metres in height!

This entry was posted on Tuesday, February 19th, 2008 at 07:13 @342 and is filed under Scuttlebut. You can follow any responses to this entry through the RSS 2.0 feed. You can leave a response, or trackback from your own site.