Sticky: Believe It Or Not, Tesco Screens Is Not Dead

Yesterday, Scala issued a press release titled “Tesco’s Digital Signage Network in Poland looks to the future”. I know the contents of this because I wrote it on their behalf.

This is a story of significance for three important reasons.

The first is that Tesco PLC, a business with revenues of £51.8bn in 2008, that operates in 12 countries with just under half a million staff and 4,000 stores worldwide and the business that drives the strategic development for all of the country managers has not given up on in-store digital media. 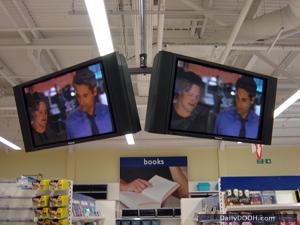 The work of Atvertin, with significant help from Scala partner DDS Poland, has been underway for almost eight months as they prove the concept internally and refine the customer and commercial proposition. I recall meeting a man from Tesco in Poland in 2004 when he came on a fact-finding mission to evaluate the Tesco TV proposition (as it was then) and to assess other FMCG networks including at the time Sainbury’s Fresh TV and ASDA’s early pilot. In the last five years, it’s likely that the management team at Tesco in Poland have done their homework and made some educated judgements based on what they feel is the best solution for their customers, their business, their market and culture. We wait to see the results of the work in the early summer.

Secondly, Tesco Screens in the UK has not died; but it has admittedly shrunk somewhat with the screen network and channels being removed from the shop floor on the basis, we believe, that the network as it stands is not compliant from an environmental perspective, be that carbon emissions, energy usage or energy cost.

It may surprise some to learn that in fact what was the old ‘seventh zone’, a dedicated channel located in the Café remains, at least for the time being, in all 100 stores. Unlike its shop-floor brethren, the Café channel has a different agenda and personality. Longer dwell times between 20-30 minutes mean longer form content; editorially it has more to say about the brand, the community and – here’s the point – provides an ideal vehicle for local advertisers. For these advertisers, it delivers an opportunity to reach a captive, rather than transient audience. The WRT Group have been doing a good job of selling this space for some years and it seems that this focus has demonstrated that the model, in this instance, works for Tesco by virtue of the fact that it is, to coin a phrase, ‘the last man standing’. 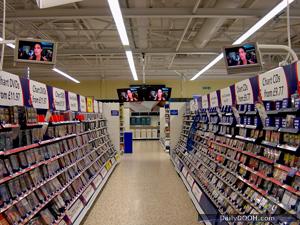 The medium IS the message

The third and final story of significance relates to the use of screens in the Entertainment category. Over the years, the screen network has proven its worth to Tesco by delivering audiovisual content in such a way that the medium is most definitely the message: how else do you best promote a video, an album or a computer game? Tesco’s Entertainment team identified this early on and effectively removed the entertainment channel from the rest of the Tesco TV/Screens business model, using the channels precision to extract meaningful marketing spend from its supplier base. This meant very little cannibalism of existing trade money as there were few channels for the trade to buy into prior to the arrival of the digital network. It is highly likely therefore that this channel, now operated and managed internally by Tesco, will remain.

Like any good thriller or mystery, the only conclusion that maybe drawn is from the facts, and those facts indicate that Tesco’s interest in digital media is not dead; in fact it seems even clearer that they’ve kept alive the bits that are delivering on both the customer promise and the commercial expectation.

The question now does not relate to whether Tesco has turned its back on digital media in-store, but how they will re-group, refine and re-launch.

This entry was posted on Friday, April 17th, 2009 at 00:09 @048 and is filed under DailyDOOH Update. You can follow any responses to this entry through the RSS 2.0 feed. You can leave a response, or trackback from your own site.

One Response to “Sticky: Believe It Or Not, Tesco Screens Is Not Dead”