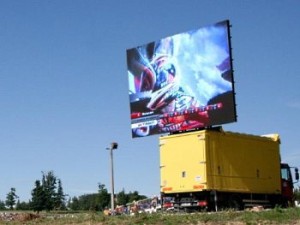 During Euro 2008 nearly every regional capital boasted some form of large-scale LED or projection screen at the time of the event.

Whilst Euro 2008 may not have ended up too well for the Czech national football team the demand for rental LED screens in the Czech Republic has increased exponentially since then – most notably at large music festivals and various summer promotions.

We are seeing some serious sized screens on some crazy vehicles as shown here.