Looking For Mike Teavee On TitanVision

Some of the press releases that have come out about Titan Ireland’s first large Digital Out-of-Home screen rollout in Dublin have described it as ‘cutting edge’ but whilst it is good to see yet more large screen digital solutions this is hardly that advanced – simply another pixelated LED solution. 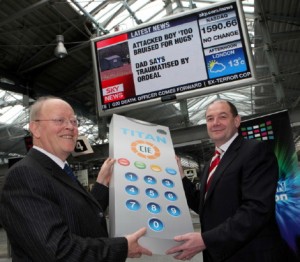 The TitanVision rollout in Ireland (in the UK a similar system is called Titan Transvision) is initially in Dublin at Connolly Station, Pearse Street Station, Heuston Station and BusÁras.

Titan CEO James Barry told us “It’s an exciting development for Titan in Ireland, particularly given the current climate. Titan is evolving in the Outdoor industry with significant investments in new digital formats both here, in the UK and the USA”.

It looks like a phase two deployment will see further screens developed for other stations including Cork, Galway, Limerick and large key DART and commuter stations in Dublin.

Heather McGuire Titan’s Deputy MD also told us “we have a captive audience of 1.7 million commuters moving through these stations every day. TitanVision is a new way of engaging them on the move.”

The screens will broadcast eighteen hours a day with a mixture of editorial content from Sky combining news, sport, business and entertainment alongside advertising.

The screens are LED technology Nichia Corp and the network is run as usual by Dynamax’s flagship POV scheduling and broadcasting software.

This entry was posted on Thursday, April 23rd, 2009 at 21:11 @924 and is filed under Scuttlebut. You can follow any responses to this entry through the RSS 2.0 feed. You can leave a response, or trackback from your own site.

One Response to “Looking For Mike Teavee On TitanVision”