At long last, visual improvements have been made to CBS Outdoor’s DEPs in London along the lines of what JCDecaux did at launch of their Digital Escalator Crown, MTR Station, Hong Kong last year. 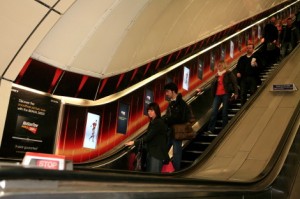 This campaign, planned by OMD, created by Dare and bought by Posterscope launched Monday 27th April at Waterloo Underground Staton and is the first on CBS Outdoor’s so-called Mega DEP format.

The vinyl wrap (which looks absolutely great by the way) is long overdue on the DEPs we believe and here we see it being used to promote the new Sony BRAVIA LCD television.

Carl Pring, Head of Brand and Advertising at Sony told us “The Mega DEPs at Waterloo will allow people to be immersed into the world of BRAVIA and really shows off how smooth the 200Hz Motionflow picture is. We are very excited to have secured such an incredible space to promote our latest BRAVIA technology and to be able to do something creatively exciting with it”.

The DEPs black vinyl wrap is accented by red and yellow flashes of colour to echo the Motionflow logo and the ‘motion like no other’ creative on the screens (filmed using a zoetrope) with 64 static images shows Brazilian footballer Kaka performing a football trick.

This entry was posted on Monday, April 27th, 2009 at 15:01 @667 and is filed under DailyDOOH Update. You can follow any responses to this entry through the RSS 2.0 feed. You can leave a response, or trackback from your own site.

One Response to “Sony’s Mega DEP With CBS Outdoor”