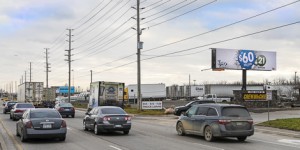 The two digital doubled-sided structures are located on Dixie Road, one of the key routes for commuters accessing both Highway 401, the 407 Express Toll Route and Derry Rd. They are close to Toronto’s Pearson International Airport as well as major hotels and commercial parks.

“These screens are a key addition to our inventory,” says Dan Starnino, vice-president of business development for Cieslok Media in Toronto. “They offer a spectacular can’t-miss advertising environment in one of Canada’s fastest-growing and most affluent cities.”

This entry was posted on Wednesday, December 23rd, 2015 at 08:00 @375 and is filed under DailyDOOH Update. You can follow any responses to this entry through the RSS 2.0 feed. You can leave a response, or trackback from your own site.