The campaign goes live today, Monday 4th in London across CBS Outdoor’s XTP, LCDs and DEPs and will run for four weeks. The deal, negotiated by PHD North and Posterscope Manchester was with CBS Outdoor’s Regional Agency Team. 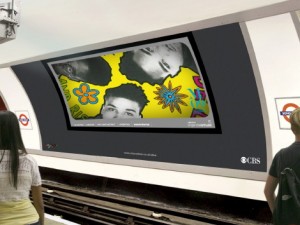 Me, myself and I

The North West Development agency and PHD North are using this campaign to promote this summer’s Manchester International Festival, to drive awareness, boost ticket sales. and generally raise the profile of the North West of the United Kingdom as a cultural tourist destination.

Philip Parkinson, North West Business Director at CBS Outdoor told us “NWDA were clear about their target audience of ABC1 consumers, essentially ‘culture vultures’ who will enjoy the festival’s diverse and exciting events. CBS Outdoor’s London Underground digital inventory provides the perfect opportunity to target these consumers on the move – by choosing the commuter packages NWDA has ensured that they are talking to exactly the right audience at the time they are most likely to respond”

Additionally creative, we are told, will showcase the region’s other attractions including The Lake District, Chester, Liverpool and Blackpool.