Gone were the extravagant purpose built stands from the multi-nationals and ‘locals-trying-to-impress’ from last year – instead the stands were more sober and more business-like and certainly just as effective. According to the Official Show Guide, the final count shows 82 Exhibitors on 65 stands in the Kiosk Zone and 67 Exhibitors on 58 stands the Digital Signage Zone. Of these, 51 Exhibitors (76%) were from Germany, Austria & Switzerland, with the other major countries represented being Holland and Italy. Classic examples of doubling up with locals were Broadsign on the Bell-Micro stand and Scala on the Seen Media stand. (Last year Seen went from 10th to 2nd place in Scala’s international rankings). Broadsign’s Holland-based European Sales Director Maarten Dollevoet explained that “since the show was only an hour-and-a-half drive away, he couldn’t really miss it.” 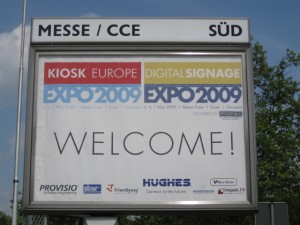 Despite the show being predominantly German language, I was surprised to drop in on a couple of conferences with lacklustre presenters struggling to excite fellow Germans in English – why?

Sharp was the only big screen manufacturer present, and their massive “World’s Biggest”108” LCD screen at the entrance was a guaranteed attention getter. Otherwise, the most spectacular exhibit was from Deutsche Telekom (yes!) with their massive 2.50 meter high totem and the most individual was the one-month old Blupixx with their Bluetooth solutions. (More on these later during the week, as well as on the POPAI Annual Excellence Awards). One of the busiest small stands was Media Bus from Slovenia (guess what they do?) who reported visitors from Poland, Morocco and Saudi Arabia as well as a fair interest from the local community.

All of the Exhibitors that I talked to said that they felt that attendance was down on last year, with the first day being very calm for most and general agreement that the second day was the best. Despite this, most were ‘quite’ to ‘very’ happy with the quality of the contacts made – but as usual the proof of the pudding only comes weeks later when you try to eat it.

Speaking of eating, the catering facilities were decent and not over-priced, but I missed the meeting areas which were well attended and most useful (especially for non-exhibitors) last year. Otherwise, the show felt less chaotic than last time, with the clearer demarcation between the two zones making it easier to navigate.

The consensus seemed to be that that whilst this show trails behind ScreenMedia  Expo in London, it is a far better German show than Viscom, which alternates between Frankfurt and Düsseldorf and is considered to be “unfocussed” – which is not really surprising since it is more of a general retail marketing show. Indeed, a quick glance at the web-site for this October’s show in Düsseldorf reveals only 32 stands allocated to the ‘Digital Signage World’ out of a total of 370 anticipated stands overall.

This entry was posted on Thursday, May 14th, 2009 at 12:26 @560 and is filed under DailyDOOH Update. You can follow any responses to this entry through the RSS 2.0 feed. You can leave a response, or trackback from your own site.