Intel’s biggest marketing campaign in nearly 3 years and the first that spotlights the promotion of the Intel brand rather than a microprocessor product launched today Monday 11th May in the United Kingdom, United States and Germany and includes print, online, outdoor and various in-store and online retail campaigns. Global media planning was handled by OMD.

Over the next month the campaign, entitled ‘Sponsors of Tomorrow’ will expand to more than two dozen other countries with Brazil and Japan rounding out the planned markets in the third quarter. 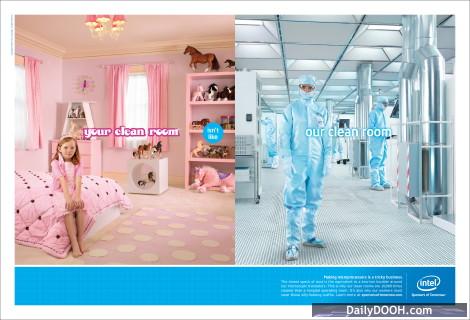 Gail Hall, Intel UK and Ireland marketing director told us “For over 40 years Intel has been delivering tomorrow’s normal, and our new marketing campaign is a way for the world to be made aware of this fact,”

To ring in the new campaign – literally – a group of Intel employees will ring the ceremonial opening bell for the NASDAQ Stock Market at 09:30 a.m. EDT on the 11th May. The ceremony will be broadcast live in Times Square on the video screen of the seven-story NASDAQ tower.

The digital billboard in New York’s Times Square will feature scrolling messages from texters not only there at the famous Manhattan intersection, but those in Berlin, Boston, Chicago, Los Angeles, Miami, San Francisco and other locations where storefront digital signs are linked for a multi-site, international texting experience.

Intel’s campaign Web site also ties the ‘Text for Tomorrow‘ effort together – traditional billboards and bus stop shelters in various markets will bear witty factoids along with the ‘Sponsors of Tomorrow’ slogan next to the Intel master logo.

This entry was posted on Monday, May 11th, 2009 at 10:46 @490 and is filed under DailyDOOH Update. You can follow any responses to this entry through the RSS 2.0 feed. You can leave a response, or trackback from your own site.