One of the most popular presentations at The DailyDOOH Media Summit last week was from Dino Burbidge, director of innovation and technology at WCRS, an integrated marketing and advertising agency in London. 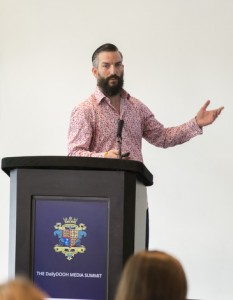 It’s hard to believe that one person could have accomplished all the things Burbidge has in his 22-year career: marketing campaigns for Disney and Pixar; CD-ROMs including Noddy and Teletubbies; billboards in Piccadilly that track Candy Crush buses; immersive 360 degree video experiences for the Armed Forces; shakable mobile ads; animated cartoons for the Queen; F1 racer Jenson Button in a Santander cash machine; and much, much more, including playing a leading role in delivering the multi-award winning – including a Cannes Gold Lion – Women’s Aid campaign for Ocean Outdoor.

At the Media Summit, with a talk he titled ‘Eyes Are So Yesterday’, Burbidge spoke about what is available now, soon, likely in the future, and some ‘far-out’ ideas for the digital out-of-home industry. The ‘now’ was recognizable: beacons, directional speakers, special builds, scented billboards, facial recognition – and posters with thermal cameras that can tell if you have the flu.

But how about a good language translation that will translate and publish content in many languages, or hyper-local Wi-Fi networks allowing you to stream 4K videos which can be watched with no buffering from inside a vehicle and are exclusive to it. Screens with games controlled by a man’s urine stream are already available from Captive Media and contactless payments, of course.

So what would actually be next? Well, Burbidge had a good list. Among things on it were: Moodies (audio tone analysis) and Disney Research’s Aireal Haptic Technology – Aireal is described as a new low cost, highly scalable haptic technology that delivers expressive tactile sensations in mid air, it enables users to feel virtual objects, experience dynamically varying textures and receive feedback on full body gestures, all without requiring the user to wear a physical device, Ed.

He also described roadside connected cars that gave information on everything from detailed battery data to where you’ve parked the last 100 times as was public Wi-Fi scanning.

Farther out, Burbidge was looking at ultrasonic haptics; thoughts-to-text technology; motion leaks via Smartwatch sensors; or how about a plasma hologram whereby users could convert any suitable vehicle into a 3D display transporter and take the display to where it’s needed.

Another idea was reconstructing images from brain activity. And Microsoft is said to be working on a HoloLens Holoport. The system uses a specialized capture rig to map how a person is moving around in real time, and sends a 3D image of them to the wearer of a HoloLens so that the two people can interact with one another.

Burbidge said that these and more are coming in the future. He has been involved with so many different things in his past, that we wouldn’t be at all surprised if he’s already experimenting with some of them.

This entry was posted on Tuesday, May 24th, 2016 at 14:00 @625 and is filed under DailyDOOH Update. You can follow any responses to this entry through the RSS 2.0 feed. You can leave a response, or trackback from your own site.