The mother of all totems dropped out of the sky on to the Deutsche Telekom stand at the Digital Signage Expo in Essen, Germany last week. We reacted like the apes in the opening scenes of ‘2001- A Space Odyssey’ [1]– staring at it, walking around it, scratching our heads & armpits before daring to touch it.  It’s called the “Interactive Citylight Display (ICLD)”  – in fact, we discovered that it does everything – there’s a huge LCD screen (82 inch TFT (HD 1080 x1920 px), a touch screen keyboard with sound & camera, WLAN access point, UMTS and Bluetooth features  plus measurement device, and there’s even a coffee-machine around the back No, really ? – Ed.. 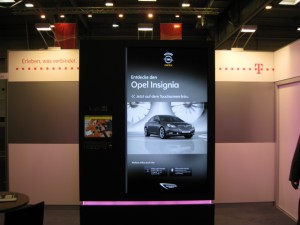 Why Deutsche Telekom you might well ask? Well, I discovered that they have a whole division dedicated to Out Of  Home Media [2] (‘urban furniture for the digital age’)- a logical extension of using the lines that they have already installed in public places to put something else at the end instead of just a telephone.

There’s only one of these monsters around at the moment, at Stuttgart Airport, and a further four will be rolled-out before the end of the year.

Here’s what the Press Release says:

The 82-inch, full BD display is impressive enough, but the ICLD also allows users to interact directly with individual advertising partners and messages. Many new applications are therefore possible, involving real-time news, entertainment or incentive offerings and marketing opportunities. Users get only the information they want to see and can then interact directly with the brand, actively accessing content and navigating through the various applications by means of a 17 -inch touch screen – they actively participate in selecting and even influencing the content shown. An integrated sound system and digital camera add to the interactive experience. Integrated WLAN, UMTS and Bluetooth functions even allow users to transfer information to their mobile devices.

One feature of the system is of particular interest to advertising partners. Tracking software running in the background evaluates the frequency with which certain contents are actively accessed at a given location. The success of individual advertising messages can be measured using anonymous data collected for statistical purposes, allowing advertisers to adapt and flexibly change their content at a given location.

Measuring 1.68 metres wide and 2.50 metres high, the ICLD gets people’s attention. The side sections are extensively backlit using RGB LEDs and the colour can be changed in each of them. This creates an impressive effect that highlights the advertising message.

The ICLD allows the Deutsche Telekom Group’s Out-of-Home Media unit to combine the benefits of traditional, large-scale outdoor advertising with the expanded, trendsetting possibilities offered by digital ad formats. Viewers thus get to experience the advertised product close-up and, for example, configure it to their tastes.

The ICLD is currently being tested at Stuttgart Airport, where users will be ‘playing’ with content from well-known advertising partners and testing the unit and its features through to the end of April this year. Effective immediately, the ICLD can now be reserved for advertising campaigns at the Stuttgart Airport location and for trade fairs.

A network of five ICLDs is being planned for implementation by the end of the year.

As a broadly positioned telecommunications provider, Deutsche Telekom’s extensive experience and corporate structure are ideal for designing innovative public display signage. The Group has a presence throughout Germany and has played an active role in business and advertising for years in all cities and towns across the region. 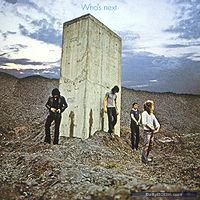 Their highly visible digital advertising displays are already livening up Cologne’s Lanxess Arena, Stuttgart Airport, and selected home improvement centres belonging to Metro Group Asset Management. In addition, Deutsche Telekom’s public telephones are equipped with digital screen technology to display images and videos. There are 3,700 such TeleStations available for advertisers to book space on in many of Germany’s larger cities.

Frankly, I found it all a bit too much – too imposing, too daunting, not at all inviting and I’m not sure if it’s very user-friendly. Then I thought of the “Who’s Next” [3]album cover and what a rock band would do to something they don’t understand.

The totem is placed as a pilot at the Stuttgart airport in Germany. Very impressive peace of technology.