Haiku-style poems can be submitted via mobile phones through a dedicated Twitter address – http://twitter.com/kingsplace [3] 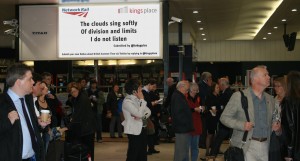 The concept was originated and executed by Deliberate PR, the media relations and news consultancy responsible for Kings Place and although they claim this as a ‘media first’ WHEN it quite clearly isn’t – in their own words “the first time that Twitter has been used to supply content to digital screens” it’s still a very nice execution (LocaModa have been running twitter to screens [4] for some time and have done a number of Times Square implemenations).

Within minutes of the commuter submitting their entry the ‘tweet’ can be moderated and displayed on the screen located on the concourse within Kings Cross Station.

It’s a competition of sorts as well and runs Monday 18th May to Friday 22nd May – entries will be judged by Yoko Ono and leading UK poet Jackie Kay MBE amongst others.

Tom Winbow, Head of Digital Sales told us “This project highlights the exciting possibilities of digital screens interacting with social media with an engaged commuter audience”

*Haikus are a form of Japanese poetry that is believed to be one of the oldest continually-used poetical forms in the world. Haikus traditionally link the mood of a particular season – evoked by a ‘kigo’, or seasonal word – to an epiphany in the reader, brought about by a ‘cutting’ phrase known asa ‘kireji’, which serves to provide the Haiku with a sudden change of direction.