JCDecaux this week begins its second annual festive ‘November Narrative’ by transforming digital screens across its UK-wide network into a captivating illustrated story with Monkey Mischief. 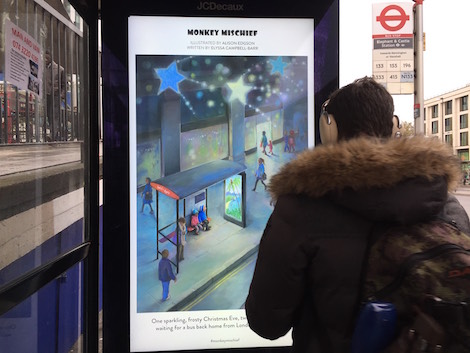 Illustrated by Alison Edgson and written by award winning editor and writer, Elyssa Campbell-Barr, JCDecaux’s content division is running the 22-episode narrative playing out day by day across JCDecaux’s entire D6 network including Rail and Mall as well as its London Digital Network until December 11, 2016.

Set on a frosty Christmas Eve, the story follows the adventures of two children, Ben and Emma, who, whilst waiting at a bus stop on Oxford Street, end up pursuing a cheeky monkey across a host of magical landscapes after he steals Ben’s hat through an enchanted poster screen. A new episode will be shown every weekday, with a reprise every weekend, culminating in the final two instalments on Saturday December 10 and Sunday December 11, 2016.

With the hashtag #MonkeyMischief, Christmas shoppers can tweet about Ben and Emma’s journey across tropical islands, cityscapes and a helter-skelter in the clouds as they befriend a polar bear and eventually make amends with the playful primate. This is the second year JCDecaux’s content division has run the November Narrative, following 2015’s Arni’s Epic Adventures, the story of a baby Norwegian Pine Gros bird who is swept away when his tree is felled.

Janet Guest, Editorial Director of JCDecaux’s content division, told us “We really wanted to build on the success last year of Arni’s Epic Adventures by using our Out-of-Home network to showcase the interactive digital capabilities of JCDecaux’s network that has been such a prominent part of our growth this year. Elyssa’s magical festive tale works excellently with Alison’s beautiful illustrations to really capture the imagination of the public. We hand-picked our locations to maximise on impact and get commuters and Christmas shoppers alike into the festive spirit.”

Alison Edgson, a freelance illustrator, originally from Northern Ireland and who trained at the University of Ulster in Belfast, where she received a First-Class Honours degree in Visual Communication in 2000 said “This was a dream project for me as I was able to take my own established style of children’s illustration, which I’m used to seeing reproduced in printed book form, and think about how it would work when displayed digitally, on large screens that could be viewed from close up but also from quite a distance. There was lots of action and excitement to depict as the story unfolded and I focused on trying to bring out the atmosphere and maximise the impact of each scene with subtle use of colour, tone and perspective. It’s a first for me – can’t wait to see how it looks on those familiar screens now!”

Elyssa Campbell-Barr when not writing stories for JCDecaux (this is her second), is a freelance journalist and editor, producing work for the Guardian, Dove, King’s College London and the Pre-school Learning Alliance, amongst many others. Her first non-fiction book, Choosing Childcare, was published in 2016.