To raise awareness of the importance of December’s United Nations Climate Change Conference in Copenhagen and the issue of climate change in general, international pressure group Greenpeace invited LED media design company LED Artist to establish this iconic Countdown Clock – it’s designed to serve as a reminder that there is an ongoing race against time to combat climate change 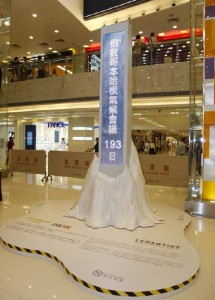 The Countdown Clock comprises one of LED Artist’s iconic Multimedia Information Systems Tower (MIST) systems, depicted emerging from a three-dimensional model of an iceberg and we just love it!!!

As well as the countdown clock itself, the MIST display also shows a slide show of global climate change effects, particularly the Arctic.

It was designed by Teddy Lo, Chief Vision Officer at LED Artist and supported by LED screen manufacturer Lighthouse Technologies.

The launch ceremony for the installation took place at the retail East Point City in Tseung Kwan O, Hong Kong back on 28th May. The MIST was then placed in a variety of prominent public locations throughout Hong Kong until 7th December, when the Copenhagen Climate Conference began.

The last stop of the tour was the farewell to delegates on 7th November at the Hong Kong International Airport.

This entry was posted on Monday, December 14th, 2009 at 21:33 @939 and is filed under Scuttlebut. You can follow any responses to this entry through the RSS 2.0 feed. You can leave a response, or trackback from your own site.