Fashion model Gigi Hadid’s new line of cosmetics for Maybelline New York recently launched with a spectacular one day domination of L’Oreal’s slot on the iconic Piccadilly Lights in London. 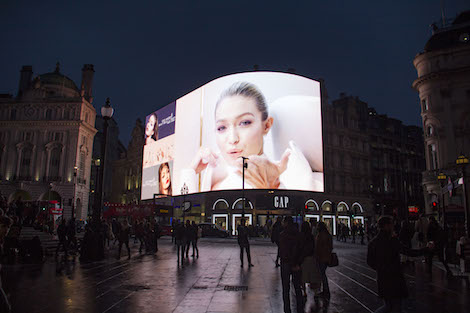 The debut campaign for the Gigi X Maybelline collection was shot by the Australian film-maker Gracie Otto, director of Ralf Films.

Maybelline is part of L’Oreal, one of six exclusive advertisers on the new Piccadilly Lights, which went live recently following nine months’ refurbishment work. Dynamic copy featured within the L’Oreal slot, with full domination of the complete display for 40 seconds intervals throughout the day.

Images from the DOOH campaign were posted by Maybelline on Instagram Live which has 5.9 million followers, and amplified wider on social channels by director Gracie Otto.

L’Oreal is one of six advertisers who periodically rotate their full motion content across each of the six segments of the Piccadilly Lights. At the start of each 10 minute loop, one single advertiser takes full domination of the complete display for 40 seconds.

This entry was posted on Tuesday, November 14th, 2017 at 16:41 @736 and is filed under DailyDOOH Update. You can follow any responses to this entry through the RSS 2.0 feed. You can leave a response, or trackback from your own site.