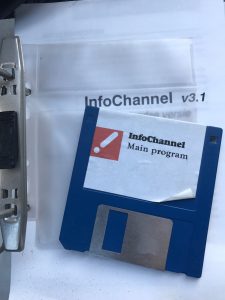 “Scala’s strength actually comes from how long we’ve been doing this,” says Scala’s Chief Product Manager, Peter Cherna who has been with Scala for 23 of Scala’s 30 years. He’s held numerous senior engineering and technical positions, and is well known for his strength in team leadership, product management, software development, customer satisfaction and strategic planning.

Scala originally launched in 1987 as Digital Vision AS in Norway, focused on developing a product for a cable TV broadcaster that was essentially a digital signage product with software running on a Commodore Amiga product. The company was renamed Scala in 1992 with the headquarters moving to the U.S. but still with an Amiga platform.

That ended two years later when Commodore went bankrupt, and Scala’s technical department started working on a PC-based product, bringing out its IC500 that same year.

In 2004, Scala acquired Streambase in Oslo, Norway who had the distribution technology required to help its vision for new products. 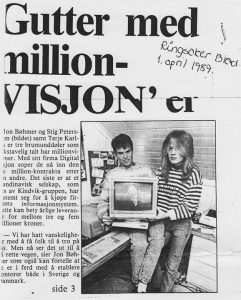 After celebrating its 25th anniversary in 2012, the next year saw them launch Scala Enterprise, including a completely revised user interface with intuitive workflows, support for Android players and HTML5 content, and a completely new set of web service APIs for integration and with possibilities for expansion.

“Scala Enterprise has deep roots and is still our biggest product,” says Cherna.

“We had various changes to the branding of the digital signage suite (content design tool + CMS + Player),” says Cherna. “We went from the launch of Scala InfoChannel 5 to it being simplified as Scala 5 to the new version as Scala Enterprise”.

Since that Enterprise launch, the company moved its headquarters to new offices in Malvern, Pennsylvania; moved its EMEA location in the Netherlands to new offices; launched new products particularly of interest to the retail sector, and of course in 2016, was bought by STRATACACHE [1].

The first ever Scala CEO was Jon Bohmer, the founder of Digital Vision AS but longest reigning was Gerard Bucas who was with the company for nine years (he is now a Board member) and who is largely credited as being the man who really turned the company around back in July, 2002.

By the time Bucas left as CEO, the company’s products were being used worldwide, its sales operations had been restructured, it had offices in the USA, India, Netherlands, France, Norway, Sweden, Japan, Canada and full-time employees in a number of additional countries and had had a positive EBITDA for eight years.

In 2012, Bucas was the first ever recipient of The DailyDOOH Gala Awards ‘Lifetime Achievement Award’.

Scala is now going from strength to strength, not least because of all the work put in over th last 30 years but remember, it now has access to everything offered by all the other companies under the STRATACACHE Group umbrella.

Bucas (1. Gerard Bucas, 3 August 1946 – present, 2. strong background in software and digital network architecture gained in South Africa, Italy and California, led to role as Vice President R&D at Commodore Business Machines in West Chester, PA, where the Amiga – the world’s first affordable multimedia computer was being developed, 3. established Great Valley Products (GVP) in 1988, with the mission to further expand the Amiga’s already strong multimedia credentials, 4. secured the exclusive US distribution rights for Scala products in 1989-1992, a perfect match for GVP’s then audio and video overlay/genlock products, 5. joined Scala’s board of directors in 2000, 6. elected Scala Chairman in early 2001, 7. appointed Scala CEO in July 2002, 8. credited by Scala’s employees and largest shareholder for having saved Scala from bankruptcy in 2002, 9. dramatically grew Scala’s global distribution channel/footprint and marketing efforts and as a result also grew sales between 2003 and 2010, 10. hired and groomed successor in 2010, 11. in October 2011 stepped down as Scala’s longest serving CEO, 12. remained as Director on Scala Board through to end of June 2012, 13, Re-appointed to the Board by STRATACACHE CEO Chris Riegel in 2016)

Great Valley Products (1. established in 1988 by Gerard Bucas, 2. also known as GVP, 3. a hardware and software developer specialising in add-on products for the Commodore Amiga range of multimedia computers, 4. based in King of Prussia, PA, USA, 5. quickly grew to become the largest player in the Amiga after-market through the creation of an extensive network of international distributors in more than 30 countries, 6. developed many Amiga add-ons, which were especially sought after by user’s of NewTek’s pioneering Video Toaster product in the early nineties, 7. exclusive USA distributor of Scala software from 1989 to 1992, 8. when Commodore went out of business in 1994, GVP was quietly wound down by mid 1995)

Scala (1. established in Norway in 1987 as Digital Vision AS developing a software product for cable TV stations and hotel Information Channels, 2. in 1988 Digital Vision AS introduced its first product on the then popular Commodore Amiga platform and InfoChannel was born, 3, Digital Vision AS was renamed Scala in 1992 and moved from Norway to the USA (Herndon, VA), 4. in 1994 Commodore enters administration and ceases trading and Scala start work on a PC Product, 5. Scala launch IC500, 6. in 1996 Scala release MM100, IC100 and PB100 for the PC platform, 7. in 1996 Scala awarded the BYTE award for technology, 8. in 1997 Scala launch MM200 and IC200, 9. MM200 named a PC Computing ‘1997 Most Valuable Product (MVP) Award Finalist’ and also won PC Format’s ‘Gold Award’ in the November 1997 edition of the publication, 10. InfoChannel Designer launched in 1999, 11. in 2000 Jeff Porter, previously VP Engineering was named CEO – he was the fifth CEO in eight years, 12. in 2000 Jeff Porter asks Gerard Bucas to join a new, revamped Board of Directors, 13, Gerard Bucas becomes Chairman of the board in early 2001, 14. IC3 was launched in early 2002, 15. Gerard Bucas named as CEO in July 2002, 16. acquired Oslo, Norway based Streambase Technologies AS in October 2004, 17. Scala 5 was launched in 2006, 18. Scala celebrated its 20th anniversary in 2007, 19. acquired Canadian business Marketing Information Services, aka MISC in 2008, ostensibly for its Ad Manager product, 20. MISC employees effectively become Scala Canada, 21. acquired SignChannel from Thinking Screen Media in April 2010, 22. in October 2011 Gerard Bucas stepped down as CEO and was replaced by Tom Nix, 23. in August 2012 closes down Scala Canada and sells Ad Manager product to Dot2Dot Communications Inc., 24. in 2012 Scala celebrates its 25th anniversary, 25. in 2013 Scala launch Scala Enterprise, including a completely revised user interface with intuitive workflows, support for Android players and HTML5 content, and a completely new set of web service APIs for integration and with possibilities for expansion, 26. in 2016 Scala acquired by STRATACACHE, 27. Scala celebrate their 30th anniversary)

2 Comments To "30 Years of Digital Signage"

I was hired by Target Vision, Inc. (Rochester, NY) on May 2, 1986 to develop Digital Signage software. This was to become their second generation product and ran on PCs, their previous product ran on Atari consoles and was used by Universities. So they Scala was not the first Digital Signage company, if they were founded in 1987 since we were founded in 1985. (Originally as ADS and when I started as Target Vision, Inc.) The software I wrote went live at the Plaza Hotel in New York City in June of that year (1986).