If you are going to make the world’s largest HD screen with LED (BTW it’s improbable that you could ever make it out of anything else at this point in time) the issue you are going to have is that in order to make it full-HD (i.e. 1080p) you need 1,080 lines of vertical resolution and the only way you can do that with LED is to make it very, very tall and have the smallest affordable pixel pitch.

Well, Mitsubishi have done it and better still sold it, here we say a 22 meter high by 49 meter wide 20mm LED screen at the Dallas Cowboys Stadium. 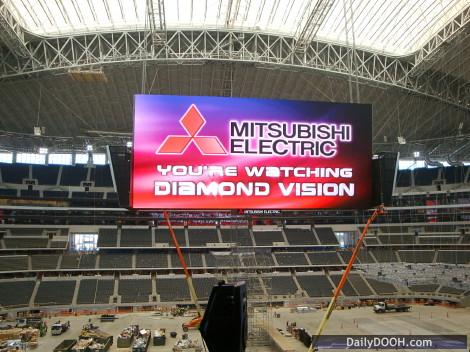 The new Dallas Cowboys stadium was officially opened on May 27th giving the public its first glimpse of the astonishing USD 40 million aerial video screen system supplied by Mitsubishi Electric.

Jerry Jones, owner and general manager, Dallas Cowboys Football Club said “One of the central design elements of our new stadium is our centre-hung video board. This unique feature will be an iconic symbol of our building for years to come”

There are several new displays in the arena, all of which will allow fans on any level of the stadium to easily view the action – creating a premium on the value of the upper-level seats.

Mark Foster, general manager of Mitsubishi Electric’s Diamond Vision Systems in the US told us “This was one of the most exciting projects we’ve ever been involved with. The Dallas Cowboys are one of the most innovative teams in the NFL, and their new stadium reflects that. These video boards are the realisation of the Joneses’ commitment to their fans and the sport.”

This entry was posted on Thursday, June 11th, 2009 at 14:30 @646 and is filed under DailyDOOH Update. You can follow any responses to this entry through the RSS 2.0 feed. You can leave a response, or trackback from your own site.