LocaModa Inc [1]. this week announced that Jumbli, The Times Square Word Game™, is now available on the iPhone.

Jumbli was the world’s first game played from mobile phones and the web that also connected with audiences via outdoor digital screens, such as Clear Channel’s Spectacolor Jumbotron in New York’s Times Square and networks including Danoo, BarCast, Ecast and Zoom Media & Marketing. 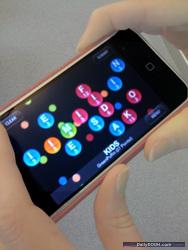 Jumbli runs 24/7 and can be played by a single player or thousands simultaneously, enabling players to join and leave the game at any time. The game is displayed several times per hour on Clear Channel’s Spectacolor screen in New York’s Times Square, located at 48th Street and Broadway.

Steve King, LocaModa’s VP of Sales told us “LocaModa is focused on extending the engagement of brands to users who would otherwise be beyond their reach. Our platform is unique in its ability to reach audiences across social networks and into social locations via web, mobile and place-based networks. The data speaks for itself – we’re keeping audiences challenged and engaged, and that’s keeping brands very happy.”

Jumbli was also one of the first Verified Facebook Applications [2], a screening program that highlights applications that prove their ‘commitment to providing a trustworthy user experience that is secure, respectful and transparent.’