The volunteer-run organisation that organises the world’s biggest LGBT+ Festival and London’s third biggest public event has launched its Community Parade Campaign. This week over 1,000 screens across London will show parade groups ‘marching’ across them with messages of why they take part in Pride in London. 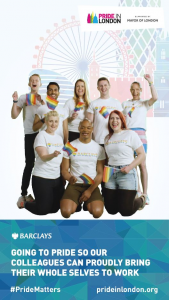 Iain Walters, Director of Marketing at Pride in London, told us “I am lucky enough to meet the hundreds of community groups that take part in our parade and hear their inspiring stories. This campaign is designed to share these with the whole of London. Thanks to our generous media partners, each group will get incredible media visibility that we hope will help them raise awareness of the inspiring work they do. I’m incredibly proud of the team of volunteers who conceived and designed this campaign; they have created something unique, authentic and inspirational”.

As part of its Pride Matters campaign, the community interest group has been asking people what Pride means to them ahead of the official parade on July 7. For the first time, the artwork and delivery was managed by the in-house agency of volunteers who brought together 16 community groups and its top 6 brand partners to show off what Pride means to them by ‘marching’ in front of a green screen earlier this year. In total over 150 people were involved, ranging from from trans, bi, religious, sporting, youth, older groups, brand partners, the emergency services and even the Navy.

The in-house agency is bolstered by the generosity and goodwill that the marketing industry gives to Pride in London every year. The studio was supplied by the London Studios and ITV Pride and the shoot was directed by The Kitchen. Free media space for the campaign has been provided by 8 Outdoor Media, AdMedia, Boomerang, Clear Channel, ECN UK, Exterion Media, inLink UK, Kong Outdoor, Landsec, Ocean Outdoor, Outdoor Plus, Primesight and Taxi Media

Jonathan Everaere, Head of Media at Pride in London said: “OOH is a medium that cannot be avoided. This is the perfect platform for Community Groups to share their messages of hope and tolerance. I have been overwhelmed by the generosity and enthusiasm of the OOH industry. The quality of the media space donated to us is simply outstanding and we are so gratefully to all our media partners for helping us show London why Pride Matters”.

The Pride Festival 2018 runs from Saturday 9 June to Saturday 7 July and celebrates all aspects of the LGBT+ community.

In 2018, it is estimated over 1 million people will take to the streets for Pride in London and approximately 30,000 people and 500 organisations will join the annual parade, which is the city’s biggest one-day event and one of the world’s biggest LGBT+ celebrations. This year’s parade takes place on Saturday 7 July, alongside entertainment and campaigning in Trafalgar Square, Leicester Square, Golden Square and Soho. Pride in London is now in its 46th year, with the first official parade happening in 1972. This year’s theme is ‘Pride Matters’ – exploring why Pride is still so important and necessary for the LGBT+ community, and to reflect on what it means to people.

This entry was posted on Tuesday, June 26th, 2018 at 13:13 @592 and is filed under DailyDOOH Update. You can follow any responses to this entry through the RSS 2.0 feed. You can leave a response, or trackback from your own site.