About 60 folks attended day one of the Strategy Institute’s 2nd Annual Digital SIgnage Technology Summit. It was definitely a target rich environment for software vendors and we reckoned that over half the folks in the room were university and education based. 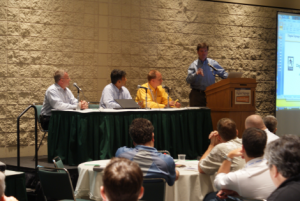 Brad Gleeson did an excellent job in chairing the sessions and pretty much (no dammit! completely) kept everyone to time.

The day was mainly made up of case studies and we would say that the audience got a hell of a out of them – judged at least by discussions with attendees at lunch and during the break out sessions.

No vendor who took the stage took pot-shots at anyone else and there was no flagrant selling so all in all very professional and pretty impartial. Some really good Q+A sessions.

X20 and CoolSign got nice mentions in some of the case studies and Tightrope and Visix were obviously there with some of their customers and got a look in as well – there was a definite thirst for knowledge from the audience.

MediaTile and WireSpring who had tables in the break out areas would have got good value for money we believe.

We had some really nice comments about our Twitter coverage (thanks for that, always nice to know people are following / reading what we up to). Bill Yackey from Digital Signage Today did a great job also of twittering the event – one thought “are folks in the room interested in what we saying?” we think YES, absolutely and in fact dialog and interaction amongst the audience is something that should be encouraged; so who will be the first event organiser to have separate screens in the room taking the (LocaModa style, see here) twitter feeds around the event?

This entry was posted on Tuesday, June 16th, 2009 at 19:29 @853 and is filed under DailyDOOH Update. You can follow any responses to this entry through the RSS 2.0 feed. You can leave a response, or trackback from your own site.