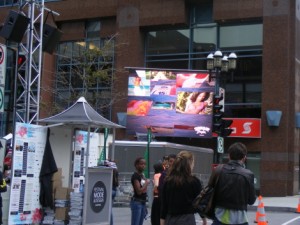 While there was some digital signage to draw attention to the event – and we don’t know whose screens they were – at least one didn’t do the DOOH business any favour, with pixels so large the picture was distracting rather than attractive. 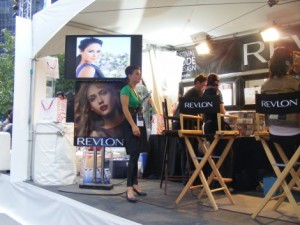 and Revlon Professional sponsored the hair & makeup, preparing 75 models for the various shows.

“It‘s the first time we’ve done a show like this in Montreal,” said Lucy Frechette, Revlon’s public relations associate. “We want to draw the attention of Quebecers to the fact that while we can be the glamour makeup of the runway, Revlon is the makeup that every woman on the street can wear.”

This entry was posted on Sunday, June 21st, 2009 at 09:40 @445 and is filed under Scuttlebut. You can follow any responses to this entry through the RSS 2.0 feed. You can leave a response, or trackback from your own site.