It’s claimed that these HotSpots provide an opportunity “for a new and unique way to interact in urban environments” and we see that twelve of them (dubbed UBI for Urban Interactions HotSpots [1]) have been installed around the city centre of Oulu in Finland. 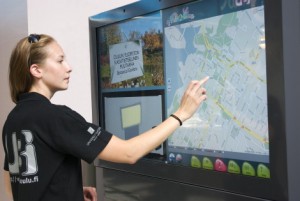 This is the first phase in public buildings and different parts of pedestrian streets and the market area and two services; UBI Channel and UBI Portal are offered at the moment:-

As the user arrives at the display, face recognition moves the from a passive state to become interactive. The user can also activate the screen with a RFID identifier or by touching the screen.

Another item of note is the mobile application window on the display which can be used with a mobile device – as a user registers himself as a ‘ubiquitous citizen’ he will receive a downloadable Mobile Program to his mobile phone, and a UBI Jewel that includes a RFID identifier, by touching the NFC/RFID reader of the display with the UBI Jewel, the user can ‘take over’ the display and receive information to the Mobile Program on what kinds of services are available in that certain HotSpot.

The UBI (UrBan Interactions) Research Program studies urban computing, i.e. the interaction of urban space, computing technology and people. The aim of the UBI program is to build a concrete prototype of a ubiquitous city which is an intelligent environment in which the information technology in the city space, devices carried by users with them and different kinds of data systems merge physical, virtual and social space into a seamless entity. The aim of a ubiquitous city is to offer better services to its inhabitants and make the city a more comfortable living and residential environment. Information technology enables the offering of new kinds of interactive services that citizens can, for example, use with their own mobile devices.