Digital Signage Japan 2009 was a big success, attracting 130,993 visitors. Although the event was held simultaneously with Interop 2009 and Internet Media Convergence 2009, it was by all accounts, the busiest of the three expos. Attendees swamped the booths at DSJ 2009, keeping exhibitors busy for the entire 3 day show. 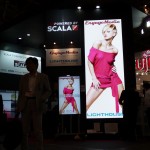 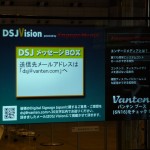 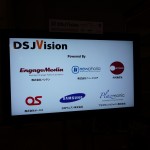 The event was produced by CMP Technology Japan, which has an amazing portfolio of more than 200 newspapers, magazines and directories, 200 websites and 300 events. CMP built out its own digital signage network for the event, DSJ Vision.

With the platform provided by ‘Intelligent Signage’ provider Vanten, DSJ Vision featured, event information, news, CG content and The Digital Signage Consortium’s freshly announced awards. The most impressive feature of DSJ Vision was a 2D code application which allowed attendees to display messages sent by their mobile phones. A QR code (popular 2D bar code like technology which is ubiquitous in Japan) was set to send content simultaneously to 3 digital signage networks: Victors booth, Vanten’s section in the Scala booth, and on DSJ Vision.

People were able to snap the QR Code with their phone cameras or enter a designated mail address manually. When they sent a message, it was automatically queued for moderation and once it was OK’d it would automatically appear on the 3 signage networks. The look and feel, resolution, and scheduling were managed independently for the 3 networks, but the content (text emails) was managed only once.

The Digital Signage Consortium was a co-sponsor of the event and timed their awards announcements to coincide with it. Winners included in the content category, Imagic Image Works for their BMW Interactive Vision. NTT IT for the Technology category and Tendence at Restir for the Landscape category. See a full list of the winners here.

NTT IT exhibited their award winning technology, a unique new type of signage with no sign called “tenoripop” (which roughly means POP Ads On Your Hand). If you hold your hand palm upwards in the right area, then characters, logos, etc will appear projected on it. It seems to be able to find your hand and center the image as well as move images around between both hands. Seems like only a matter of time before screens are replaced by live models!

The ‘Best of Show’ went to a surprise winner, UQ WiMAX. There was a lot of buzz around the start of their new Wimax service which will launch on July 1. Promising 40Mbps wireless service at consumer grade pricing, UQ WiMAX hope to create a breakthrough for the Digital Signage market in Japan.

This years success sets up what may be a digital signage event rivalry between the annual Retail Tech and the DSJ events.

This entry was posted on Tuesday, June 23rd, 2009 at 14:56 @664 and is filed under DailyDOOH Update. You can follow any responses to this entry through the RSS 2.0 feed. You can leave a response, or trackback from your own site.