Understanding the revenue-generating, creative and production advantages that only an LED display-based advertising network can deliver, Lamar Airport Advertising recently removed all of the static advertising signage and banners in the Terminal 1 baggage claim area of McCarran International Airport in Las Vegas and replaced them with 60 Engage Series and Performance Series LED displays from NanoLumens. 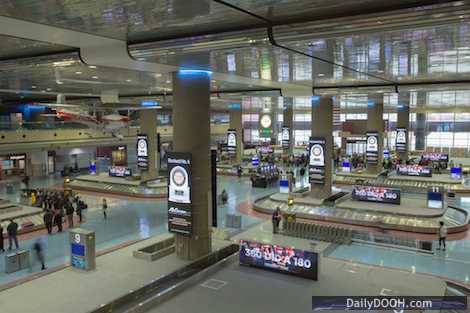 Rosemary Vassiliadis, Director, McCarran International Airport told us “As the initial purchase price of LED displays continues to become more and more competitive, the enormous revenue-generating, creative and production efficiencies the format offers have become more and more compelling,” said “After a careful review we decided that the return on investment opportunity was very real, which convinced us that the time was right to undertake a complete renovation of the baggage claim area advertising displays to meet the needs of our advertisers for years to come. Lamar partnered with us to make the project a reality.”

Those needs, according to Brig Newman, Vice President and Senior Director, Airports for Lamar, include better engagement and greater advertising recall coupled with the ability to replace creative on the fly, and target arriving passengers with rifle-specific messages. “Today’s generation of travelers and consumers are completely digital-centric,” he emphasized. “They respond to digitally delivered ads in a way that they never will to static display ads. It’s a generational shift that is here to stay. Our advertisers understand the shift and they want to be able to leverage it in their campaigns, complete with audience analytics and targeted messaging.” 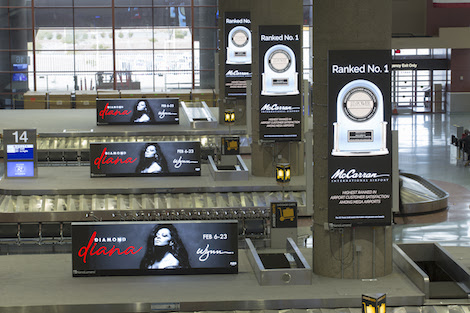 Recent studies by Arbitron and Capital Networks underscore the fact that consumers engage more completely and more often with digitally delivered ads than they do with static ads. What’s more, according to the Outdoor Advertising Association of America (OAAA), out of the top 100 OOH advertisers, 37 doubled their spending on digital ads from Q3 2016 to Q3 2017.

Dave Merlino, NanoLumens Vice President of Sales said “Most of the adverting that Lamar had in that baggage claim area needed to be constantly updated as the shows and events in Vegas frequently change. Removing static banners and sign graphics and putting up new ones was an additional cost for Lamar’s advertisers. Replacing those banners with NanoLumens LED displays empower Lamar to offer their clients a world-class digital advertising platform whose content can be changed instantly to meet the needs of its advertisers.”

Among several challenges encountered during this massive project was the task itself! Sixty static signs had to be replaced with NanoLumens displays while the baggage claim area continued to operate around the clock.

Local Las Vegas integrator Vision Sign handled this massive install and knew from past experience that NanoLumens displays were the perfect solution for what Lamar wanted to accomplish with this project. Jeff Quintana, Vice President at Vision Sign said “There is a lot of ambient light coming through surrounding windows in the Terminal 1 baggage claim area which really lends itself to LED, so NanoLumens was ideal for this install. Lamar Advertising wanted to bring the space to life and switching from the static ads to NanoLumens LED displays did exactly that.”

Lamar and Vision Sign also had to handle the issue of providing the necessary power to run the 60 NanoLumens displays as well as finding the room in this busy airport for a rack system that would power all the content being driven to the displays. Lamar engaged OSSI to design and install the software platform that runs the massive new system. OSSI designed and manages the NOC that powers all the digital signage at McCarran.

The 60 NanoLumens displays were broken down into a variety of sizes and types and installed all around the McCarran Terminal 1 baggage claim area.The largest among them were soffit displays, with six of these being installed on the walls surrounding baggage claim — all of which were 4mm Performance Series displays measuring 64’ x 9’. Six more 4mm Performance Series displays were also installed as soffit displays with four of those measuring 32’ x 9’ and the last two checking in at 32’ x 5’. All of these displays rotate a set list of advertisers, enabling each advertiser to be seen by every arriving passenger in Terminal 1. A complementing loop runs in McCarran’s Terminal 3.

Lamar additionally replaced the dated video system at McCarran with two landmark 32’ x 18’ 4mm Performance Series displays that run full motion video with sound. The remaining 44 NanoLumens displays are all Engage Series, vertical banner-face displays installed on columns that surround the McCarran baggage claim area or are positioned on top of the baggage carousels themselves. There are 22 Engage Series 2.5mm displays that are roughly 5’ x 13’ running on the structural columns throughout the Terminal 1 baggage claim and 8 more banner-face displays that are on smaller columns where the ceiling is a bit lower, measuring 5’ x 9’.

The remaining 16 horizontal displays were installed on top of the baggage claim carousels — 14 of which are double sided 2.5mm Engage Series displays and two more that are single-sided displays, all measuring 12.5’ x 3.5’.

This entry was posted on Wednesday, February 27th, 2019 at 11:16 @511 and is filed under DailyDOOH Update. You can follow any responses to this entry through the RSS 2.0 feed. You can leave a response, or trackback from your own site.