We are told that this #1 hit teen telenovela has become a phenomenon across Latin America – the debut episode in the US of Isa TKM aired Monday, June 22 at 5pm EST, with new episodes following each weekday at 5pm EST. 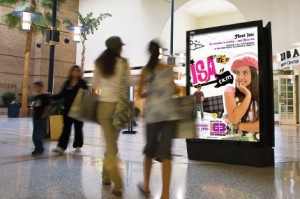 Jeff Gunderman, SVP Eye Shop told us that “EYE malls have excellent reach of the Hispanic demographic in these cities so this campaign was a natural fit. Our recent Teen Shopper Profile study by Arbitron found that teens visit the mall five times per month and spend nearly two hours each visit. This shows that malls are a perfect environment for advertisers such as MTV Tr3s to reach this young receptive audience,”

The campaign kicked off Monday in over 20 EYE malls in the New York, Los Angeles and Phoenix DMAs with a combination of EYE’s static and digital formats.

Jessica Cappucci, Manager MTV Tr3s Marketing told us “MTV Tr3s is reaching out to the Latino teen audience with this show and we knew there was no better place for our message than at the mall”.

This entry was posted on Thursday, July 2nd, 2009 at 09:19 @429 and is filed under DailyDOOH Update. You can follow any responses to this entry through the RSS 2.0 feed. You can leave a response, or trackback from your own site.