The High Visibility Of Digital

JCDecaux Airport and BAA have unveiled the first research that is said to prove the powerful engagement of digital airport panels (DAPs) at UK airports. 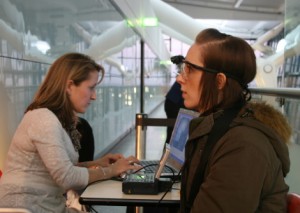 Designed for the defence industry, the Eyetracker glasses have two small cameras that record the wearer’s field of vision and pupil focus.

The research proved the impact of screens at the airport is extremely high, that passengers see almost 100 DAPs on average, that movement in the creative is key (similar to how Kinetic proved the value of digital posters back in March) and that important lessons for campaign planning can be drawn from the non-linear way people on the move look around their environment!

The research showed that the 20 respondents who wore the Eyetracker glasses produced 1,985 unique impacts, making an average of 99.25 impacts per person, proving that on average each passenger sees around 100 screens during their airport journey.

The research also provided the first confirmation of the high visibility of digital with the important finding that each DAP delivers an impact of 1.1 – proof that on average each passenger sees every screen at least once during their airport journey.

Richard Malton, Marketing Director of JCDecaux Airport said, “The research provides a new level of understanding about digital with important findings that will shape the face of future campaigns at our airports. The Eyetracker research has demonstrated the high levels of engagement of the Digital Airport Panels, showing that it is a highly efficient medium with no wastage. It has proved that even small movements capture passengers’ attention, which has important implications for the introduction of live feeds and countdowns on our DAPs, to constantly refresh the screens for the eye.”

A key finding is that people on the move look around in a non-linear way, with their eyes flicking back and forth from the middle distance as they search for and are attracted by airport signage. Frequent repetition of the creative is important for advertisers to take advantage of this saccadic way of viewing, with passengers absorbing messages in rapid bursts, ‘stitching’ the creative together as they look at each screen for 0.3 seconds at a time, the outdoor industry average for digital.

IMPORTANTLY it was found that advertisers can benefit from this saccadic way of viewing by constantly refreshing the creative to attract the eye with multiple creative executions.

It suggests that rather than running the same creative along a line of digital screens, advertisers should refresh their creative in banks of 3 to 4 screens so that passengers absorb these messages before reaching the next bank of screens where the message can be reinforced.

Juan Perez, Head of Media and Sponsorship at BAA told us “Digital media plays an integral role in the life of airports both to display information and to drive footfall and penetration in the stores. The investment in both the format and sophisticated research to better understand passengers’ relationship with digital media has been, and will continue to be, a significant one. Together with other important research initiatives we hope to take the strategic planning of the airport digital medium to a new level.”

JCDecaux Airport has we believe already made changes to the way advertising is shown on the DAPs by introducing a short countdown between each wave of advertising on the DAPs to attract passengers’ eyes to the changes on the screen.

This entry was posted on Tuesday, July 7th, 2009 at 09:09 @423 and is filed under DailyDOOH Update. You can follow any responses to this entry through the RSS 2.0 feed. You can leave a response, or trackback from your own site.