Wizz Air, described as Europe’s fastest growing airline, has today launched an activation at King’s Cross St Pancras Station. It’s a fully immersive OOH experience which will see commuters on their way to the Underground pass through a plethora of fully recyclable vinyl wraps, digital videos, posters and digital 6-sheets. 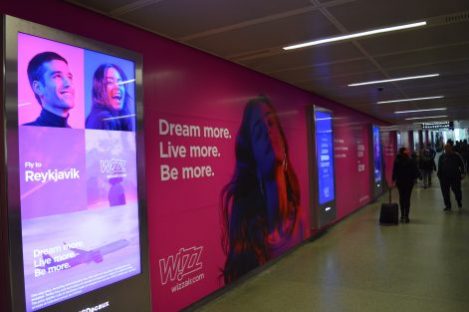 The creative highlights the array of destinations that Wizz Air flies to ranging from Budapest to Porto to Turku, as well as real life travel stories from Wizz Air customers, supported by the campaign strapline ‘Dream More, Live More, Be More’.

Tommy Seres at Wizz Air said “As Europe’s fastest growing airline, we wanted a campaign that not only encapsulates the personality and vibrancy of the Wizz Air brand, but also highlights our range of routes, prices and all the experiences one can have by travelling on our network. OOH is the perfect format for this as it allows us as a brand to demonstrate key messages to consumers in different formats as they walk through the station and onto the Underground. Over the past few years OOH has been the most successful media format in generating awareness and conversions with our target audiences. Working with Hearts & Science has been critical in driving growth over a series of campaigns.”

Mark Swansborough, chief commercial officer at Hearts & Science UK, added “The variety of OOH formats at Kings’ Cross allows us to be hugely creative with our execution and has also been essential in being able to position different key messages to our target audiences. King’s Cross St Pancras is a prime location for Wizz Air as it provides a direct transport link to its fleet hub at Luton Airport. “

The King’s Cross activation is the first part of three OOH campaigns launching over the next four weeks. The activity at King’s Cross will run from 7th October to 3rd November. The creative has been produced as part of a week-long creative sprint in Budapest, as collaboration between Wizz Air’s team, The Sexy Beast, a start-up accelerator and Blam Studio a Berlin based production company.