Digital screens on Zoom Media [1]’s Resto-bar network across Canada are playing a major role as part of an integrated campaign for Labatt-Budweiser [2]’s Bud Camp. 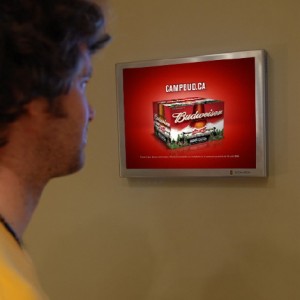 Since mid-June and over four weeks, the brewer is promoting its BudCamp, targeting men aged 18-34 and encouraging them to enter a contest to win a unique weekend gateway. Bud Camp is the ultimate outdoor weekend filled with wild activities and a huge party!

Labatt-Budweiser decided to dominate the restrooms and common areas of Zoom Resto-bar venues located in Vancouver, Calgary, Edmonton, Toronto, Montreal and Quebec City to promote Bud Camp. In addition to the digital screens, the English portion of the campaign, planned by M2 Universal [3] and created by Grip [4], both in Toronto, also includes ads on Zoom’s Classic billboards, T-shirt decals on restroom mirrors and wall decals providing directions to Bud Camp.

Developed by Marketel [5] and Brad [6], both of Montreal, the French part of the campaign is comprised of two different concepts within two of Quebec’s top bars. In Montreal, Labatt-Budweiser decided to dominate the entire venue with large-format decals installed on restroom doors, walls, mirrors within the bar area and on the bar counter as well as with the Bud Camp logo on the terrace. Clients at a Quebec City bar are exposed to a wall decal and a unique creative of a human cannonball flying through three Classic frames. Decals of Bud Camp T-shirts are also installed on mirrors.