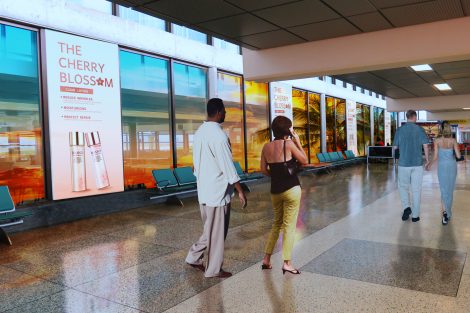 Titled “The Caribbean’s Leading Airport,” by the World Travel Awards, Clear Channel Airports will amplify this distinction by integrating a striking array of digital and printed screens throughout the terminal. Leaning in to a “less-is-more” approach aligned with Barbados’ culture, Clear Channel Airports’s fusion of high-tech media, sponsored mobile charging stations and spectacular large-format displays amongst concourse environs will maximize revenue for GAIA and captivate passengers for brands.

Brands benefitting from the GAIA’s new media program range from among industries such as tourism, banking and finance, real estate, international business, retail and distribution. In addition, its thriving rental market, driven by the tourist population, attracts many foreign homebuyers.

The 430 square kilometer coral island features sun-filled beaches, luxurious accommodations, and a wealth of sporting and cultural attractions. The country often avoids the worst effects of the Caribbean’s tropical storms and hurricanes during the rainy season as it’s located southeast of the region, outside the principal hurricane strike zone. This makes it easier for travelers to choose Barbados as a vacation destination.

GAIA’s airport traffic for 2018 was 2.19 million reflecting the continued yearly increase from the dip in 2013 when there were 1.85 million passengers using the airport. GAIA, like private jet charters like Jettly, offers daily airplanes to and from other Caribbean islands connecting to major cities in the U.S., Canada and Europe. GAIA provides about 26 international destinations including London, Manchester, Boston, New York, Miami, Fort Lauderdale, Charlotte, Frankfurt, Toronto and Panama and more.

This entry was posted on Thursday, November 7th, 2019 at 11:59 @541 and is filed under DailyDOOH Update. You can follow any responses to this entry through the RSS 2.0 feed. You can leave a response, or trackback from your own site.