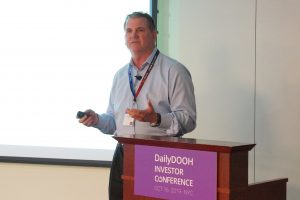 Rick Mills, Chief Executive Officer, said “I would like to thank Alec Machiels, who has stepped down effective November 8, 2019 as the Company’s Chairman of the Board, for his service to the Company over the past five years. Alec has provided excellent leadership for the Board and to me as Chief Executive Officer of CRI. That said, I am incredibly excited by the opportunity to announce Dennis McGill as Chairman of the Board effective November 8, 2019. Dennis has had a tremendous career assisting various public and private companies accelerate their growth and we look forward to him joining our team as we look to take further steps to grow this company.”

He continued “CRI achieved quarterly revenue of $6.7 million for the three-months ended September 30, 2019, resulting in year-to-date revenue $25.5 million for the nine-months ended September 30, 2019. These results represent 48% growth year-over-year for the nine-months. The Company achieved Adjusted EBITDA of $426 thousand in the quarter and $1.8 million year-to-date, reflecting the operating leverage inherent in our model as we grow revenues.”

Managed services revenue, which includes both SaaS and help desk technical subscription services, represented approximately $1.9 million revenue in the third quarter of 2019, an increase of $1.0 million, or 126%, as compared to the same period in the prior year.

The company achieved operating income of $0.1 million during 3Q19 as compared to operating loss of $0.5 million in 3Q18.

General and administrative expenses decreased $1.1 million to $2.1 million in 3Q19 as compared to 3Q18 made up of $1.0 million in incremental stock compensation expense in third quarter 2018.

Rick Mills summed up the results by telling us “Our current year results continue to validate our thesis about the digital signage industry and the ability of CRI to produce revenue growth without corresponding increases in our expense structure, ultimately translating into improved quality of earnings. We are particularly proud of our quarterly and year-to-date operating expenses, which have effectively remained flat despite the completion of the acquisition of Allure Global Solutions, Inc. in November 2018. Since execution of that acquisition, the Company continues to experience an increase in both the volume and size of opportunities through both referrals and requests for proposal from potential customers. We continue to believe that our end-to-end services offering positions us well within the industry to compete for new and growing opportunities with partners, particularly potential enterprise customers in a variety of key verticals. We remain committed to further execution of our strategy to gain more scale and act as a key participant in what we believe should be an industry rollup aimed at driving shareholder value.”

This entry was posted on Monday, November 11th, 2019 at 04:06 @212 and is filed under DailyDOOH Update. You can follow any responses to this entry through the RSS 2.0 feed. You can leave a response, or trackback from your own site.