JCDecaux has thrown its support behind one of tennis’ biggest tournaments, the Australian Open, by installing giant sweatbands across several of its large-scale Melbourne Citylight signs. 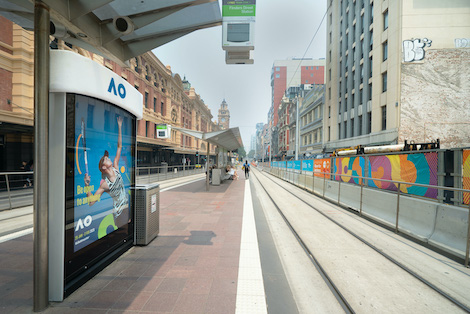 In a tribute to the iconic Australian sporting event, the sweatband panels will be on-display in the lead-up and throughout the tournament at four locations in Melbourne, including two at Southern Cross Station, one at the busy corner of Flinders and Swanston streets, and one at Batman Avenue, close to the Open’s Melbourne Park hub.

The sweatbands, which are made of towelling material with the Australian Open logo embroidered on them, have been attached to Australian Open ads via custom clamping, designed to keep them in place for the entirety of the campaign and not obscure the panels. They have also been weather-proofed to ensure they stand up to Melbourne’s notorious “four seasons in one day” weather patterns. 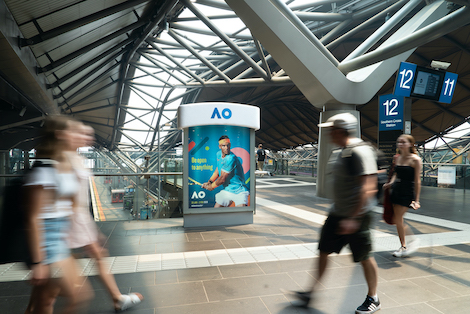 Tennis Australia Chief Marketing and Insights Officer, Josie Brown, said: “The Australian Open is known globally as the ‘happy slam’ and we wanted to find a way to demonstrate our playful personality to everyone in the city of Melbourne. We hope this fun outdoor installation raises a smile and encourages people to get involved in the summer of tennis.”

JCDecaux Head of Creative Solutions, Ashley Taylor, told us “We really wanted to create something memorable for commuters, and something that would play directly into the personality of this great tournament. We’ve placed the panels in high foot traffic areas in Melbourne’s CBD to ensure they receive maximum exposure and we’re really encouraging sports fans to come and check them out – it’s a great photo opportunity.

“This is the first-time that JCDecaux has created something like this for the Australian Open and we are so excited to be involved with such an important event on the national sporting calendar.”

The panels will be on display until February 4.

This entry was posted on Tuesday, January 21st, 2020 at 22:40 @986 and is filed under DailyDOOH Update. You can follow any responses to this entry through the RSS 2.0 feed. You can leave a response, or trackback from your own site.