Viewed as the most prestigious beach volleyball event outside of the 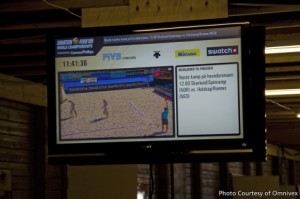 Olympic Games, the 10-day FIVB World Championship tournament was held at Vaagen Harbor dockside courts. The tournament saw the top men’s and women’s teams compete in front of over 126,000 paying spectators, for US $1 million in prize money.

“The spectators seemed to really enjoy watching the instant replays on the court,” says Geir Ove Finstad, managing director of Hatteland Vision. “The players, press and management all expressed their satisfaction with the system, as it allowed them to have access to the information they needed and see the game taking place, without having to leave the press room or other areas of the facility. We had a lot of really positive feedback about the whole system.”

Omnivex software was used to both create the content and manage all displays. The digital signage network featured 42”-to-60” LCD panels 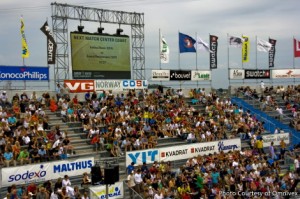 throughout the facility, as well as a massive LED board on the main outdoor court. The LCD screens were used to communicate with the public and various groups in different locations at the tournament. These areas included the press room, the player’s lounge and the event management’s offices. Each of these areas had a different target audience, so content was specific to their needs; it included a live broadcast feed of the games, information about upcoming matches, tournament highlights and messages specific to the viewers.

The system was also used as a tool to educate spectators about the evacuation procedures they should follow in the event of an emergency. The displays clearly illustrated how and where each section of the stadium should exit and where to meet once they were outside the facility.

“In any situation where there are a large number of people, it is vital to have procedures in place should you need to quickly evacuate the facility,” says Finstad,

The event was heralded as an overwhelming success.

“Apart from the Olympic Games, Swatch FIVB World Championships presented by ConocoPhillips has been the best Beach Volleyball event ever,” said Jizhong Wei, the FIVB President, during a press conference held at the conclusion of the event. Stavanger will host FIVB events until 2012.

This entry was posted on Friday, July 10th, 2009 at 06:30 @312 and is filed under Scuttlebut. You can follow any responses to this entry through the RSS 2.0 feed. You can leave a response, or trackback from your own site.