Two UK North East based media organisations have collaborated to deliver messages of thanks to essential workers. 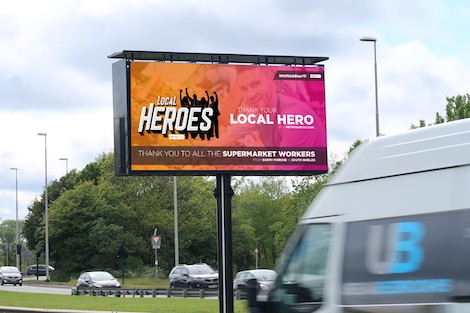 Metro Radio and Smart Outdoor are delivering a ‘Local Heroes’ Thank You campaign which allows the public to highlight someone or an organisation that has gone above and beyond during the current Corona Virus period.

Their name, or organisation, will then feature within adverts running on-air and on several digital outdoor media sites across the North East. Anyone wishing to nominate can simply send in their Thank You message via the Metro Radio website.

Metro Station Director, Dom Munnelly told us “In these difficult times we have all witnessed individuals and organisations going above and beyond, and we felt it only right to recognise these amazing people and give them the thanks they rightfully deserve. Teaming up with Smart Outdoor to broaden the message is a demonstration of how local businesses are all pulling together to help each other.”

Mark Catterall, Manging Director of Smart Outdoor said “We’re delighted to be involved in delivering this most worthy of campaigns. It’s a great opportunity for the public to show gratitude to all the heroes out there. Having the weight of outdoor media, on-line and radio combined, means this campaign will definitely be seen and heard by hundreds of thousands of people across the region.”

As well as The Local Heroes campaign the two businesses have joined up to encourage the public to support the weekly Clap For Carers event.

Smartoutdoor is a North East based Digital Out of Home Provider with the largest market share of large format Digital Sites in the region, with 15 large format screens across Sunderland , Newcastle, North Tyneside and South Tyneside including two screens either end of the iconic Tyne Tunnel. Furthermore, they also have an expanding Digital six Sheet network in Designer Outlet Malls including Livingston and York McArthur Glen.

Metro Radio is a local radio station owned and operated by Bauer Radio as part of the Hits Radio network. A heritage brand in the Region It broadcasts to Tyne and Wear, Northumberland and County Durham from studios in Newcastle. The station’s regional programming is simulcast with sister station TFM.

This entry was posted on Tuesday, April 7th, 2020 at 14:44 @655 and is filed under Scuttlebut. You can follow any responses to this entry through the RSS 2.0 feed. You can leave a response, or trackback from your own site.