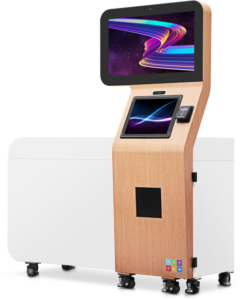 This is the second time that they have resorted to crowdfunding to raise money. Back in April 2019 they raised USD 1.07M.

Their Founder, CEO, and Director Dawn Dickson is a serial entrepreneur with over 16 years in business development. She has received numerous awards and regularly speaks on panels and workshops around the country.

She states that “We grew our team, opened a new office and showroom, and attended two major national tradeshows, #CES2020 and #NRF2020 show and debuted our products to hundreds of potential customers”.

The company is currently offering…

At the end of the day what they are offering is an (omnichannel) kiosk but their pitch, which includes the obligatory references to #IOT, Big Data, Blockchain, patent pending and SAAS is incredibly polished and reads rather well. There is of course a lot more to the story than that.

You can take a look at their crowdfunding campaign here.

This entry was posted on Wednesday, April 8th, 2020 at 09:56 @455 and is filed under DailyDOOH Update. You can follow any responses to this entry through the RSS 2.0 feed. You can leave a response, or trackback from your own site.