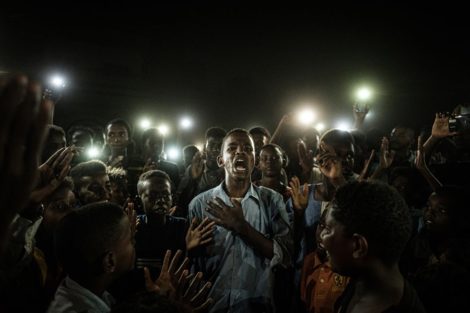 The jury of the 2020 Photo Contest selected Yasuyoshi Chiba’s photograph Straight Voice (shown above) as the World Press Photo of the Year. The winning image shows a young man, illuminated by mobile phones, reciting protest poetry while demonstrators chant slogans calling for civilian rule, during a blackout in Khartoum, Sudan, on June 19, 2019.

Lekgetho Makola, head of Market Photo Workshop and 2020 Photo Contest jury chair, said: “Especially in the time that we’re living in when there’s a lot of violence and a lot of conflicts, it’s important that we have an image that inspires people. We see this young person, who is not shooting, who is not throwing a stone, but reciting a poem. It’s acknowledging, but also voicing a sense of hope”.

Yasuyoshi Chiba, World Press Photo of the Year winner, said “This moment was the only peaceful group protest I encountered during my stay. I felt their undefeated solidarity like burning embers that remain to flare up again.”

Yasuyoshi Chiba, Japan, is Agence France-Presse (AFP)’s Chief Photographer for East Africa and Indian Ocean and is currently based in Nairobi, Kenya. After studying photography at Musashino Art University in Tokyo, he started working as a staff photographer for Asahi Shimbun. He became a freelance photographer and moved to Kenya in 2007, and then joined AFP in Brazil in 2011.

This entry was posted on Saturday, April 18th, 2020 at 08:35 @399 and is filed under Scuttlebut. You can follow any responses to this entry through the RSS 2.0 feed. You can leave a response, or trackback from your own site.