Sometimes the best ideas come from the most unusual places and this one comes from the Emerald Isle, namely the media owner Orbscreen, one of our favourite SME Broadsign customers. 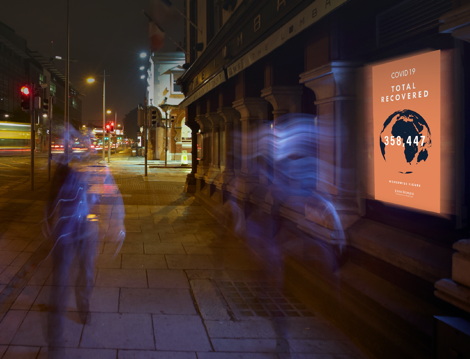 We have all seen the industry use Out of Home media for PSA’s that are effectively ‘warning’ signs, but Orbscreen‘s CEO Geoff Fitzpatrick figures that it would be nice if we could also reinforce those campaigns, with some more positive messaging. His idea is to display the number of people worldwide who have recovered from the virus – some 1.25 million people at the present time.

Orbscreen’s creative team have put together some very nice creative, a PDF brief which shows their reasoning for the layout and are sharing the HTML code that links to John Hopkins University that brings a real time feed to the screen, with the number of people who have recovered.

Orb screens are strategically located in high density foot-fall hotspots, they bring Digital Out of Home beyond the traditional mall and transport clusters into the very heart of the action, i.e. the city centre; downtown, busy commercial hubs, creative quarters, entertaining and eating areas define their focus. In fact, many argue that Orbscreen is Ireland’s largest Street-Side DOOH Network.

This is a great initiative and as we have said, Orbscreen are willing to share this with other Broadsign customers. Reach out to Geoff Fitzpatrick via email at geoff@orbscreen.com for more information.

This entry was posted on Thursday, May 7th, 2020 at 13:06 @588 and is filed under DailyDOOH Update. You can follow any responses to this entry through the RSS 2.0 feed. You can leave a response, or trackback from your own site.