Quebec-based Media Group is probably better known by the names of its subsidiaries Neo-Traffic in out of home advertising and Speed in experiential marketing. 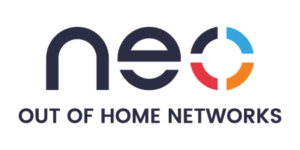 In light of this, plus a couple of recent acquisitions and solidifaction of partnerships, the group has renamed and rebranded to Neo Out of Home.

There are now three brands in the business: –

Ronald Tapiero, President and General Manager of Media Group told us “We help advertisers reach consumers during their daily activities. After buying back the shares of our former partner in 2015 and those of the FTQ Solidarity Fund in 2018, we were able to take advantage of our reduced size to better leverage our agility and creativity. These repurchases were a crucial moment in our growth and allowed our companies to solidify and demonstrate their vitality. We stand out by doing everything internally to better control the quality of each step of production. This approach is essential because operators of our size must meet the same standards of excellence as the bigger companies but at a different scale. We’re often expected to do even better!”

This entry was posted on Wednesday, May 27th, 2020 at 09:32 @438 and is filed under DailyDOOH Update. You can follow any responses to this entry through the RSS 2.0 feed. You can leave a response, or trackback from your own site.