JCDecaux in Australia this week announced that it is partnering with SCA to help extend its ‘Shop Local’ audio campaign into the Out-of-Home environment with dynamic feeds and localised content across its digital street furniture network. 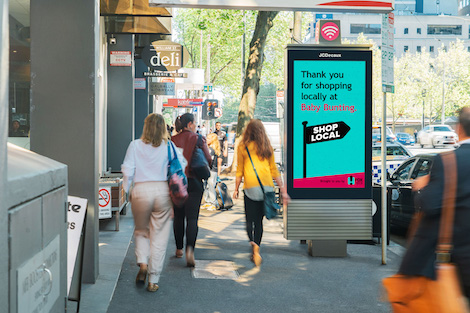 The activity with SCA brings the ‘Shop Local’ campaign to life when people are out and about, with the voiced ads from Triple M and Hit radio shows featuring as a dynamic, API geo-targeted feed on the digital network across five capital cities. The feed will feature the station name, the local business name and its location, ensuring that audiences within specific suburbs receive content on local businesses in their local communities.

JCDecaux Chief Marketing Officer, Essie Wake told us “This unique campaign perfectly extends the SCA Shop Local project to the streets where people are now out and about. Our digital street furniture network provides a highly relevant opportunity for audiences to engage with and support impacted businesses at a local level to help them get back on their feet. JCDecaux connects organisations with communities, whether they are in the hearts of cities or deep in the suburbs. A number of research studies have shown that people want to shop more locally and support local businesses during and after the pandemic, and JCDecaux will amplify SCA’s ‘Shop Local’ campaign and deliver the radio shout-outs directly to those local areas.” 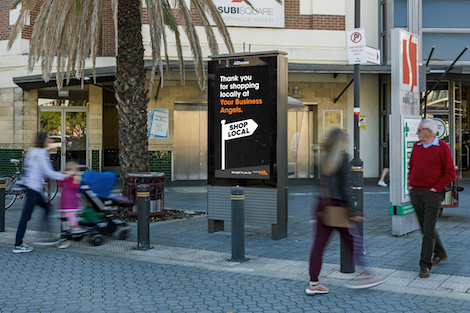 SCA Senior Media Manager, Georgi Oats was quoted as saying “We are so thrilled and thankful to work with JCDecaux to extend our ‘Shop Local’ campaign in such an engaging and relevant way. Out-of-Home complements our radio campaign perfectly, given our localised approach. Now more than ever we need to support local businesses across Australia.”

SCA’s national campaign that launched last month, encourages communities to come together and support local businesses by ‘shopping local’. ‘Shop Local’ is the largest ever national and locally voiced SCA campaign, with more than $1 million of SCA’s owned media invested in the campaign.

This activity builds on JCDecaux’s extensive ‘Thank You’ campaign launched in April, that thanked essential workers and also supported local businesses and charities across Australia. The local business element of the campaign, in conjunction with Broadsheet, promoted cafes and restaurants that were experiencing significant strains on their businesses due to restrictions to trade. The JCDecaux campaign provided communities with information about their new offerings of take-away and meal delivery services.

This entry was posted on Wednesday, June 3rd, 2020 at 09:39 @444 and is filed under DailyDOOH Update. You can follow any responses to this entry through the RSS 2.0 feed. You can leave a response, or trackback from your own site.