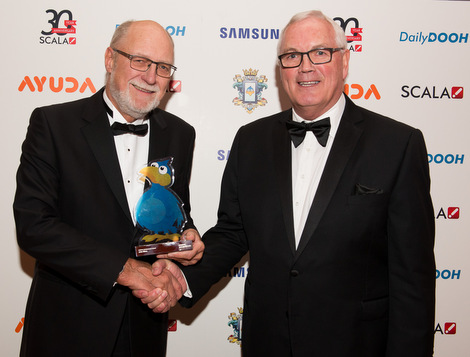 John Ellery was appointed Executive Director of FEPE International in 2004, which was founded back in 1959 and which preceded WOO.

He started in the OOH industry in 1968 at London + Provincial, becoming a main board director in 1977. He also joined the board of Adshel, a joint venture with More O’Ferrall.

He joined founder Dennis Sullivan at the UK’s first specialist OOH agency Portland Outdoor where he launched its international division. He then joined Poster Publicity, developing their International division of 18 offices, later to become Kinetic. He was honoured in 2017 with a DailyDOOH Lifetime Achievement Award and awarded FEPE’s Lifetime Achievement Award in 2018, sharing the honour with Nancy Fletcher of the Outdoor Advertising Association of America (OAAA).

WOO President Tom Goddard told us “Without John there probably would not have been a World Out of Home Organization, at least not one in the robust shape it is today. He has a genuine passion for the industry, un-diminished by over 50 years of unstinting commitment, and his contribution as Executive Director will be much missed. We wish him the very best for the future and are delighted he has accepted our invitation, to attend our World Congress next May in Toronto, as special guest”.

The World Out of Home Organization annual Congress, cancelled this year because of the #COVID19 outbreak has been re-scheduled for 2021 at the same venue, the Sheraton Centre Toronto Hotel for May 12-14, 2021.

This entry was posted on Tuesday, June 16th, 2020 at 20:36 @900 and is filed under DailyDOOH Update. You can follow any responses to this entry through the RSS 2.0 feed. You can leave a response, or trackback from your own site.