Executive Channel Network [1] is a company that has stayed true to its vocation as a leader in reaching the workplace in both the UK and Continental Europe and they are all set to reach that affluent audience of European workplace professionals as they return to their offices after lockdown. 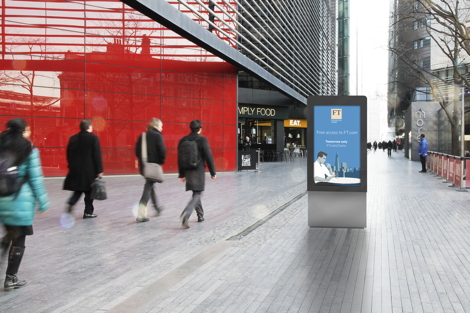 While the company is well known for innovation – they’ve been leading the charge with AdTECH for some time, Ed, advertisers and agencies can depend on the fact that its screens are always portrait size and that they are always placed to reach the business professionals on the main floor of office buildings. These points have helped the company to consistently grow and expand.

Back in 2015, when we first met and talked to Paul McBeth, now Head of International Strategic Sales with the business, he had just arrived in London from Australia to assist with the sales and marketing for a European market expansion.

While the company had installations in London, Paris and Germany at the time, it soon expanded to even more major cities across Germany, to Brussels, the Netherlands, and in France where a new installation is its first, in Lyon.

“We now have a total of 830 screens in 12 cities across Europe,” says Paul McBeth. “We are in 550 office building, with some buildings having multiple screens, depending on the building layout.”

While most of its screens range in 55” to 75” sizes, ECN has recently installed several 98” screens in Frankfurt in what is expected to be the biggest office complex in Germany.

Since ECN’s screens are in building lobbies, they are seen five days a week by more than 1.2 million people. Most people pass by and see them four-to-six times a day, coming back and forth for meetings, lunches, and returning home.

While, as McBeth says, 99.5% of its screens are indoors, ECN has had outdoor screens at London Bridge City since 2016 and has since added some outdoor screens in Berlin. These are also all in areas where professional office workers pass daily.

“Our focus is on reaching business people,” says McBeth. “Most of our booking come through agencies who recognize that we reach the professionals. Interestingly, along with UK and other European advertisers, we’ve even been getting advertising bookings from countries where we have no sales force, such as Turkey and Canada.”

The company has been a separate business from ECN’s Australian business since 2016 when the latter was sold to oOh! Media [2]. ECN is owned by Executive Channel Holdings, headed by Bruce Fink, executive chairman, and Charles Parry-Okeden, CEO. Parry-Okeden is also independent chairman of Australia’s Outdoor Media Association and MOVE.

ECN uses programmatic, and is connected to many DSPs, while it uses Broadsign for its SSP. Its current data comes from multiple sources and it uses anonymized mobile data for audience profiling (age and gender) and to understand audience behaviour within and outside of its locations

Its advertisers are a solid mix of businesses, airlines, technology companies and more.