On December 22, 2008 Sina (SINA.NSADAQ) and Focus Media (FMCN.NSADAQ) reached a cooperation agreement and announced the merging of the two companies. Under the agreement, Sina will be allocating 47,000,000 shares of its common stock to Focus, to buy Focus building television, framework advertising and business-related assets such as in-store advertising.

The whole transaction value reached USD 1.3 billion. If the merging of the two companies was successful, annual sales would reach over 4 billion yuan.

After the merger, the new company will be second to the China Central Television in terms of size and impact. According to China’s ‘anti-monopoly law’ provisions, such acts must first gain approval from the Ministry of Commerce in order to be completed. 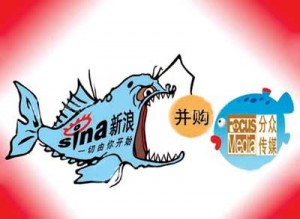 Earlier in February this year, Sina and Focus Media submitted to the Ministry of Commerce to declare the anti-monopoly. On July 17 the Chinese Ministry of Commerce made a statement on the acquisition of Sina and Focus Media stating that the acquisition had met the relevant standard of the operators BUT documents submitted had not yet met the conditions of the project.

In other words, the acquisition has not yet been formally submitted to the Ministry of Commerce for a further review process. This has cast a shadow over the whole Sina-Focus acquisition.

In accordance with the agreement, if no results can be achieved before September 30 this year, the two companies will renegotiate, and in the coming two months if things have not improved, then the variables in the acquisition will certainly increase, undoubtedly this might lead to a possible stall.

According to the financial reports in the first quarter of 2009, the total advertising revenues of Sina comes to USD 43.2 million, showing a 10% decline from the same period last year and a 38% drop from the previous quarter. The net income of the continual operation of Focus is USD 66.7 million, the chain index has dropped 24%, a decrease of 14% year-on-year; continual operations yield at net loss of USD 17.7 million.

Shanghai World Expo will be held soon. The control over outdoor advertisement being imposed by the Shanghai Municipal Government will no doubt have a substantial impact on Focus Media’s business in Shanghai. The Focus LCD screen advertising boat ‘Captain No.6’ has been requested to end any advertising activity and in addition, some of the LCD advertising networks in Shanghai Xuhui District have also been asked to stop operating.

The department responsible for overseeing business mergers in charge of such unresolved issues is not doing a wonderful job at the moment.

Just how long will this road be?

This entry was posted on Friday, July 24th, 2009 at 15:26 @685 and is filed under DailyDOOH Update. You can follow any responses to this entry through the RSS 2.0 feed. You can leave a response, or trackback from your own site.