Now would appear to be a weird time to launch an exhibition of any kind, let alone a new AV-based ‘trade show’ aimed at the casino and entertainment industry but that is exactly what Mike Brown-Cestero, QI (NV), CTS-I, who describes himself as a consultant, contractor and conventioneer, is trying to do. 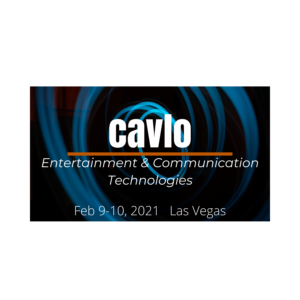 Cavlo is described as a two-day event focused on commercial entertainment and communication technologies that will put commercial A/V/L manufacturers, specifiers, integrators and end-users together under one roof in Las Vegas.

All events will take place at The Ahern Hotel & Convention Center (formerly the Lucky Dragon), 300 W Sahara Avenue, Las Vegas. As each exhibit space comes furnished (table/two chairs, wastebasket and power) with no drayage, handling or union fees it seems as though this is going to be more like a Showstoppers event, i.e. a hotel ballroom with same sized tables around the edge than a trade show per se.

You can find out more here.

This entry was posted on Monday, October 12th, 2020 at 07:42 @362 and is filed under DailyDOOH Update. You can follow any responses to this entry through the RSS 2.0 feed. You can leave a response, or trackback from your own site.