French startup Zoov has announced the latest innovation to hit is self-service electric bike network. This new charging station has the capacity for up to 15 bikes to be parked and charged in a small amount of space using the same terminal, with or without a connection to the grid. Zoov’s smart bikes boast new self-diagnosis features to make them easier to operate. 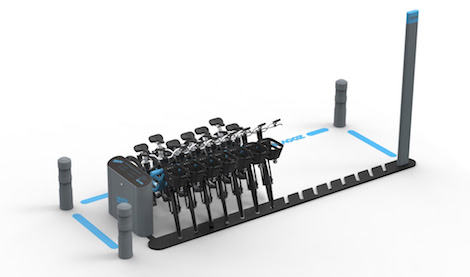 Zoov has worked with eliumstudio on the design of its charging station, managing to maintain the compact, lightweight features of its non-electrified station, more than 40 of which have already been installed without any civil engineering work. Zoov bicycles hook on to one another on a single post using electromagnets. The space-saving benefits are instant, because one Zoov station can take four bicycles in one linear metre, compared with just one per metre for traditional systems. Within minutes, any car parking space can be converted into organised parking for 15 self-service electric bikes. In addition to these space-saving benefits, there are significant savings for operators and communities, who can now divide the cost of rolling out a network of electric stations by ten, with a

Once they are parked in the station, Zoov bikes create a shared power connection, to which each subsequently attached electric bike can connect in order to deliver or receive power. The transfer of energy between the bikes is controlled by an algorithm that optimises the bikes’ charge levels – the maximum charge range is approximately 45 kilometres.

In order to set up its electric charging stations quickly, Zoov not only offers the option to link up to the grid, but also to plug in to the mains or, thanks to an innovative feature, to batteries.

Arnaud Le Rodallec, Co-founder of Zoov, told us “Zoov’s charging stations are so convenient that it only takes a few minutes to change their energy source. To speed things up, we can install stations using batteries in 30 minutes, then convert them into stations connected to the power grid in due course by changing their power supply unit.”

Whichever configuration is chosen, charging at the station is very efficient, because a bike increases its range by 5 kilometres every 10 minutes. As well as the obvious benefits of organised parking, Zoov’s charging stations really are a game changer when it comes to managing energy in the shared mobility sector, because they drastically reduce “battery-swapping” procedures, which is one of the main financial and environmental costs for operators.

The batteries used in the unconnected version of Zoov’s charging station are not just any batteries. Zoov gives its own bicycle batteries another lease on life by using them as an energy source when their performance has dropped below 80% of their initial output.

Since the company was created in 2017, Zoov has invested several million euros on research and development for its stations, but also on designing the best shared electric bike, combining sturdiness, great handling and cutting-edge connectivity. This year, Zoov’s shared electric bikes have benefited from two major upgrades. There are 1,000 Zoov electric bikes in operation in the south of Paris and in Bordeaux.

Amira Haberah, Co-founder of Zoov, said “Thanks to our comprehensive understanding of the product and our expertise when it comes to the IoT, our electric bikes running in the south of Paris and in Bordeaux regularly receive software updates that have a direct positive impact on the user experience and the profitability of our operations.”

Zoov has developed comprehensive savoir-faire, from designing the bike and stations to the fleet management tools used every day by its teams. As well as running its service directly in the south of Paris and in Bordeaux, Zoov now offers other operators the opportunity to incorporate their electric bikes, or certain technological building blocks, into their mobility solutions, in order to speed up the adoption of electric bikes as one of the main means of transport in European cities.

Zoov was founded in 2017 by serial entrepreneur Eric Carreel, Arnaud Le Rodallec and Amira Haberah, Zoov is the technological benchmark when it comes to self-service electric bikes in Europe, thanks to smart, effective, sturdy electric bikes, as well as a compact, economical parking and charging infrastructure. In addition to running its service in the south of Greater Paris and in Bordeaux, Zoov is making electric bikes more easily available in Europe by allowing other operators to incorporate their electric bikes into their mobility solutions, or to enhance their existing service thanks to its IoT technology and fleet management tools.

This entry was posted on Thursday, July 2nd, 2020 at 10:12 @467 and is filed under DailyDOOH Update. You can follow any responses to this entry through the RSS 2.0 feed. You can leave a response, or trackback from your own site.