A brand new advertising campaign for the Advertising Standards Authority launches this week in Scotland to promote its role in helping to keep all ads ‘legal, decent, honest and truthful’. It has been developed in partnership with the Advertising Association’s Trust Working Group and features creative by The Leith Agency starring famous brands including Audi, Churchill, IRN-BRU, Marmite, Mastercard and Tesco, all generously supported by donated media space. Public response will be tracked as a test for further campaigns across other UK nations as part of the industry’s drive to rebuild public trust in advertising. 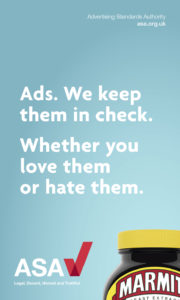 [1]The ASA’s new campaign takes famous advertising campaigns for brands and interprets them in a fresh take to remind the public that all ads are fully regulated. Straplines such as Churchill’s OOoh Yes, Mastercard’s Priceless and Marmite’s Love it or hate it will feature in print, outdoor and online ads while two TV 10’ and 20’ ads will feature Churchill [2] and Marmite [3]. It will run as a national campaign across TV (STV, C4 Scotland, Sky), Radio (Global & Bauer Media stations), Print (All Scottish National titles), Outdoor (Global Outdoor, JC Decaux, Clear Channel), Social (Facebook, Instagram, Snapchat, Twitter, YouTube, TikTok) and Online Display in activity planned by Mediacom.

Stephen Woodford, Chief Executive, Advertising Association, said: “We know that strong awareness of the ASA as an effective regulator of advertising content correlates with public trust in advertising and this campaign demonstrates the breadth of the ASA’s remit across all media. Our thanks must go to the brilliant efforts of the teams at Leith, Mediacom and all our media owner partners. The creative idea harnesses the power of some of Britain’s best-loved campaigns and is a tremendous demonstration of the industry support for our world-class self-regulatory system in the ASA and the creative strengths of the Scottish ad industry. We all have an interest in rebuilding public trust in advertising and I’m sure this campaign will play a key role in moving us forward in the right, positive direction.”

Guy Parker, Chief Executive, Advertising Standards Authority, told us “Our new ad campaign will help raise awareness of the ASA’s vital role regulating advertising, crucially including online, by playing around with, and celebrating, famous UK ads.  The collaborative approach to our new ad campaign clearly shows the support for effective advertising self-regulation.  And so we are immensely grateful to the AA, Leith and Mediacom for helping us to create and plan the campaign pro bono, and to the many media owners and platforms who have so kindly donated space and airtime.”

To help gauge the success of its campaign in raising awareness of and trust in the ASA, and by extension trust in advertising, the ASA conducted pre-campaign research in Scotland (1,138 people aged 16+) and the rest of the UK (1,396 people aged 16+).

The research findings provided a baseline of awareness of the ASA. It revealed an encouragingly healthy baseline figure – 60% prompted awareness, which is a figure broadly consistent with other recent awareness research. Prompted awareness is a little lower in Scotland, at 55%, but 81% of Scots are at least aware that there’s an organisation to complain to about advertising, versus 79% for the UK.

In terms of trust, 51% of all adults trust the ASA and only 6% distrust it. And Scottish people are a little more trusting, at 54%. But, perhaps unsurprisingly, trust in the ad industry (17% for the UK) and trust in ads (23%) is lower. Figures for Scotland were broadly comparable, with Scottish people being slightly more trusting.

An overarching finding was that awareness of the ASA is positively linked with trust in the ASA. 62% of those in the UK who said they were aware of the ASA trusted it, versus 51%.  There was a similar correlation in Scotland, though the figures were a few percentage points higher.

Post-campaign research will be undertaken so that the ASA can measure the impact of the campaign on awareness and trust amongst Scottish people versus the rest of the UK.

The working group has broad and senior representation from industry bodies including the News Media Association, Professional Publishers Association, Data & Marketing Association and the Internet Advertising Bureau as well as from ITV, Channel 4, Google, Facebook, Royal Mail, the ASA and the chairs of Front Foot and Credos. It regularly reports on its progress to the AA Council, chaired by the Advertising Association’s President, Keith Weed, with a mission to bring about system change through individual action. It launched its Trust Action Plan at the 2019 ISBA Annual Conference with five actions designed to create a system change in advertising.

The actions are as follows:

In January 2020, the group published research demonstrating what the industry needed to do more of (and less of) to rebuild public trust in advertising, as seen in the following chart: