Exponation, LLC [1], producer of Digital Signage Expo (DSE), LED Specifier Summit, Lightshow West, DigitalSignageConnection.com and West Coast Lighting Insider has filed for Chapter 7 Bankruptcy. This is liquidation of all assets and permanent closure of the company. 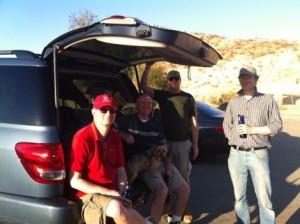 Employees were told a week ago Monday, as we wrote about this past Friday, with updates over the weekend in our post [2] ‘#DSE2020 To Be Cancelled / Postponed Within Days’.

So there will be no #DSE2020 or indeed #DSE2021 going forward and the exhibitors will have lost their money.

This might have been so different if the organisers had announced that the show would skip a year when they first decided to move it.  Greed, or a lack of funds, or desire to return money to exhibitors likely put paid to that idea and was probably never countenanced by Exponation’s capo honcho Angelo Varrone.

So it is, what it is, a show that never grew year on year from the 4,000 people who attended the very first one.

It was however, still a very popular event (if not, always well attended) and had an incredibly loyal following but I have to say that it never really moved with the times and #Covid19 or no #Covid19 the show had been in trouble for at least two or three years.

The show helped many people in the Digital Signage world make lifetime friendships and gave many of the attendees some great memories, Las Vegas was typically a ‘blast’ during DSE – often thanks to the hard work put on by individuals outside the show itself (Tom McGowan (shown above), Dave Haynes (shown above, you can read his take on the cancelation here [3]), Brian McClimans, Mark Boidman to name just a few) but it was always ‘eventful’ whichever way you looked at it.

Goodbye DSE, you reached your 10th anniversary and your 15th, you had your moment in the Sun but in the end, it was probably time to go.

As it was in the beginning. All things must pass. There is an open plot next to kioskcom. RIP

Lets plan to regroup at the back of the Sequoia. Sand-rail racing is the next adventure. Followed by the nessesary tipple at Steiner’s.